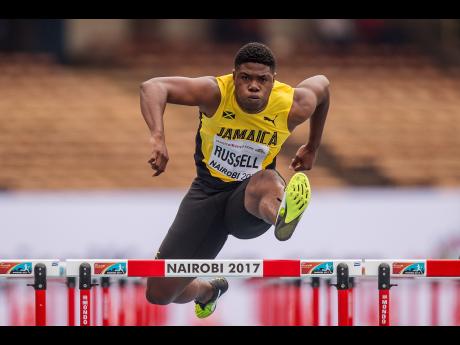 Getty Images for IAAF
Jamaica's DeJour Russell competing in the boys 110m hurdles heats on day two of the of the IAAF Under 18 World Championships in Nairobi, Kenya last Thursday.

The curtains came down on the IAAF World Under-18 Championships in Athletics in Nairobi, Kenya, on Sunday. Jamaica recorded eight medals - three gold, two silver and three bronze. It was the final staging, coming hard on the heels of a name change from the IAAF World Youth Championships (WYC) for which, this year, to be eligible, athletes had to be either 16 or 17 as at December 31, 2017.

Foster's Fairplay saw the event as the ideal testing ground for a younger set of athletes, by having them perform in front of the type of audience they will meet once they proceed to the senior level. A condition to this would be that they maintain their interest in the sport and live up to early promise. It is agreed that the under-20 edition, due next year in Tampere, Finland, and previously known as the World Junior Championships (WJC), remains.

However, before the World Youth was introduced in 1999, there were many instances of athletes at the upper age level event competing against others who were close to four years their senior. It is unfortunate and unfair that this could once again be the case. One can vividly recall Jamaica's young talents, Gillian Russell (Sudbury, 1988), Melaine Walker (Annecy, 1998) and Anneisha McLaughlin (Santiago, 2000), who fell in this category and would have been eligible for the next two editions of the WJC.

DO NOT IGNORE NEW OPPORTUNITIES

The global under-18 event is no more and thoughts are that the International Association of Athletic Federations (IAAF) is seeking to promote development opportunities with more competition at the regional level. This sounds like good news, as it should lead to a greater outflow of talent when the graduates from this additional exposure move on to a higher level. However, there is no existing shortage of this type of activity. With the Central American and Caribbean Junior Athletics Championships, no longer held, already in place are the Carifta Games and the Pan American Junior Championships, the latter including North American territories like the USA and Canada.

Foster's Fairplay is suggesting that the IAAF, along with the heads of regional federations, investigate why so much outstanding talent, especially among the black, gold and green, is not seen when the international scene for these young athletes comes along. It cannot be the same in other territories, as they do not enjoy the blessing of high-school championships which grabs the attention of the world, as Jamaica does. If the focus is shifted to July, as challenging as that would be, Champs becomes a major distraction. At least one of the main drivers of the five-day spectacle is reported as saying that the high-school season ends in that period, paying scant attention to the midyear sector when the young athletes face off with the world. It is what happens in that arena that can determine the support and recognition that the individual country receives from the IAAF. So, in order that the young athletes receive the support to extend their brilliance over the longer period, and ensure for those inclined a more lucrative career, the opportunity to parade, as well as the advantages that can accrue on the wider stage, should not be ignored.

Let the IAAF further enhance its own image as a producer of performances of excellence by pumping the funds saved from the discontinuation of the World Under-18 Championships into a scheme that will assist in fulfilling the role that was envisaged in the first instance. The governing body cannot afford to be seen as shortening the fuse on excellence. They must act in firm support of those 15- and 16-year-olds who are performing incredibly well at the Youth level. This is most important, as it is those kids who the world body is claiming, as a part of their lockdown reasons, are not making the transition to the senior level. Instead of closing the door of experience at the world level, afford them an equally effective chance to display their skills, even if sited in their own backyard.

This would show that the mentioned move to cast aside the former WYC does, in fact, lead to progress in the area which is crucial in the upkeep of the engines of global track and field.