The Wright View | Protect our juniors from abuse! 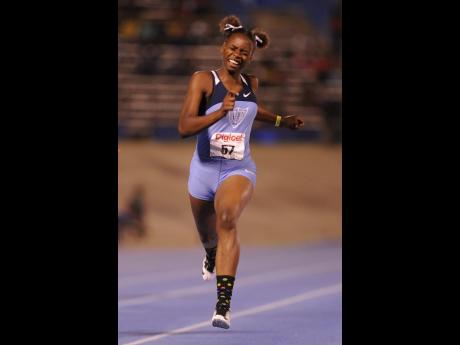 Jamaica's team to the Under-18 World Championships, held in Nairobi, Kenya, last week, saw a resurgence of sorts in medal haul, as the team garnered eight medals, seven more than our last appearance two years ago. The eight medals won by our juniors equalled the table-topping eight-medal haul four years ago in Donetsk, Ukraine. This time, however, the Championships in Nairobi had countries refusing to send their children, citing "security concerns". In reality, there can be congratulations to our youngsters, some of whom were travelling to Africa for the first time, and there, faced uncertain and unpredictable weather conditions that must have affected their performance.

We celebrated not only the medals earned by our children, but every athlete who did a personal best must have felt our surge of pride all the way there in Nairobi. The defeat of Sanique Walker in the 400m hurdles event, after one 'dehgeh, dehgeh' technical fault over the last barrier moved some fans to near tears.

The biggest disappointment, however, must be the failure of sprint sensation Kevona Davis to complete the much-anticipated 100 and 200m double in Nairobi. This 'national treasure' has demonstrated this year that she is indeed the real deal, and in the mind of many of us, losing in Kenya was never even contemplated. The first sign of trouble, however, was the appearance of a bandage on her thigh in the heats of the 100m race. This was followed by even more bandages in the semi-finals, which she won. Alarm bells went off and were getting louder and louder in the minds of knowledgeable fans (including medical practitioners and coaches).

The question on the minds of these discerning fans and observers in Jamaica was, under what circumstance could the medical and coaching staff in Nairobi allow an obviously injured child to keep running at top speed, when it is well known that at 15 years of age, time is on her side? We were not there, but in an interview on a local radio station, arguably the world's greatest sprint coach, Glen Mills, stated quite definitively that running a child in bandages should not be allowed!

Coach Mills went on to remind all of us that it is well known that a damaged muscle takes time to heal; and, in the interview, he revealed that he allows his athletes to heal properly, after injury, before returning them to top-class competition. We are all aware that coach Mills has handled the injuries of Usain and Co. exactly as he stated in the interview, and his results speak for themselves. I have long postulated in these columns, that children of exceptional talent, who are discovered at Champs, should be designated national treasures and treated as such. The fact that our Nation produces these talented children year after year tends to mask and reduce the impact that the overuse and the running of injured children have on the careers of potential world champions.

Mills reminded the listeners in that radio interview that he was the one responsible for the ISSA-led reduction in the number of events that children can do at Champs. Mills and others have recognised the inherent danger of overusing and running injured children (by adults who should know better) in a mad desire to "win, no matter what". This 'philosophy' presents the clearest danger to our producing world champions that excelled in Class Three at Champs. It should now be noticed that most of our present World beaters in athletics blossomed late in life, or took years off running when injured, to heal properly before returning to competition.

I believe that the time has come for there to be a post-mortem of sorts on the decision-making of those charged with the careers of our young athletic phenoms, and after a thorough investigation, take steps to protect these children from what is obviously abuse!