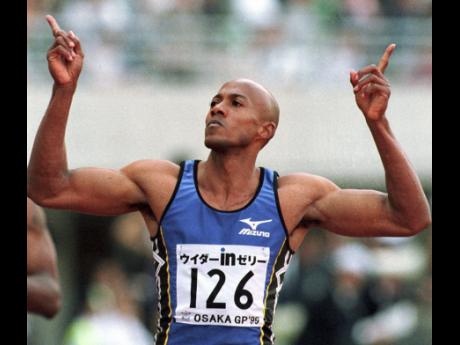 AP
A May 8, 1999 file photo of Frank Fredericks of Namibia celebrating his victory in the men's 200-metre final in the IAAF Japan Grand Prix in Osaka, Japan.

Four-time Olympic medallist Frank Fredericks has been suspended from duty by track and field's governing body, the International Association of Athletics Federations (IAAF), while he is investigated for alleged corruption suspected of being linked to the 2016 Olympics hosting vote.

The independent Athletics Integrity Unit said on Monday that its request for an interim ban on Fredericks, a former sprinter from Namibia, was granted by the IAAF disciplinary panel.

Fredericks, who is also an International Olympic Committee (IOC) member, is separately being investigated by the IOC ethics commission over a near-$300,000 payment he received on October 2, 2009 the same day Rio de Janeiro won the 2016 Olympic hosting vote in a four-city contest.

French daily Le Monde alleged in March that the payment came from a Brazilian businessman and was channelled through a sports marketing company created by Papa Massata Diack, the son of former IAAF president Lamine Diack. Both Diacks are implicated by French prosecutors in a corruption case that includes extorting money from athletes to cover up doping.

Fredericks denies wrongdoing, claiming that the money was for contracted consultancy work. He previously offered to step aside from his IOC work and his IAAF duties, but has opted not to give up his seat on the ruling Council.

"I am not prepared to voluntarily consent not to undertake my duties in respect of the position I hold as IAAF Council Member," Fredericks wrote to the disciplinary panel.

However, he did agree to avoid attending a meeting in London next month on the sidelines of the August 4-13 World Championships.

Fredericks plans to contest the suspension at a hearing, the integrity unit says.

In its published interim ruling, the IAAF disciplinary panel said Fredericks had the presumption of innocence while under investigation.

Still, the panel chairman noted that "Fredericks has not, in the answers and explanations he has provided to date, disturbed the prima facie case of matters warranting investigation."

Those matters include "whether there was any connection between the payment and the IOC vote to award the 2016 summer Olympics to Rio de Janeiro," the IAAF panel said.

Fredericks was seen as a rising star in Olympic circles until the case was reported. He had to resign as chairman of the IOC panel evaluating the bids of Los Angeles and Paris to host the 2024 Olympics, and agreed not to take part in that hosting decision due in September.