Volleyballers step up preparation for CAZOVA 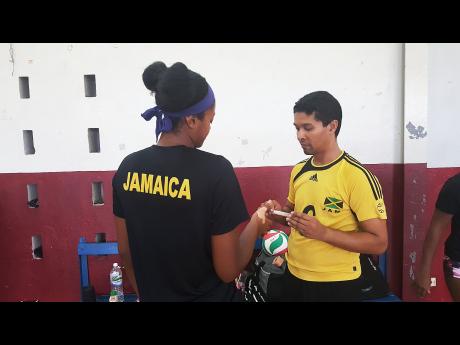 Contributed
Ricardo Chong (right), head coach of Jamaica’s volleyball team which will be participating in the CAZOVA Women’s Championship, straps the fingers of player Tahleia Bishop, prior to a training session on Sunday afternoon at the UWI gymnasium, Mona Bowl.

Jamaica's national women's volleyball team has stepped up its preparation for the 2017 CAZOVA Senior Women's Championship.

The tournament, to be hosted by the Jamaica Volleyball Association (JAVA), will be held from July 26-31 and also serves as the Second Round Qualification Tournament for the 2018 World Championship.

"We started training in April, and the initial dates were on the weekends until we were able to get the facility to train during the week. Then we upped it to four days - Tuesday, Thursday, Saturday and Sunday," said Ricardo Chong, head coach of the national team, during a midsession training break on Sunday at the UWI Bowl, Mona, gymnasium.

As part of its weekend schedule, the team had trained from 9 a.m.-noon, break for three hours, then resume at 3 p.m. and go for another three hours.

"We're now about two weeks to the tournament, so the amount of days have increased and times per day has increased as well because we have to get the players up to the point where we're almost simulating tournament-type conditions, where they're going to be training in the morning for at least an hour and then playing in the evenings," Chong explained.

The break period is for rest and recovery.

"There are things that we do for them to recover ... what we're doing now is that they have recovery techniques, ice baths, we have people who have volunteered to help to do massage therapy. Of course there's nutrition and hydration to help with that," he pointed out.

The coach noted that the lack of a home facility for volleyball has its limitations, but preparation "has been good".

"So far it has been good," he said of the team's preparation.

"But like all minor sports in Jamaica, we're at a deficit because we don't have our own facilities, and we're going to be competing against teams that have their own facilities," observed Chong.

"The defending champions - Trinidad and Tobago - had a facility dedicated to their volleyball team earlier this year, so they've exclusive training facilities seven days a week.

Besides the hosts and defending champions, the remaining participants are the US Virgin Islands, Suriname, CuraÁao, Bahamas, Guadeloupe and Martinique.