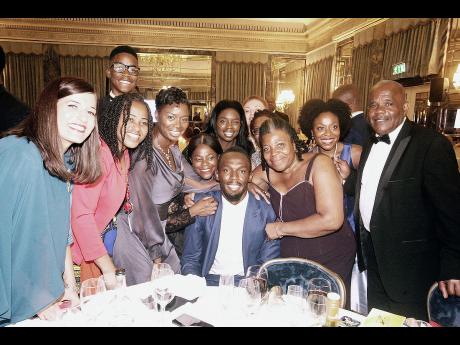 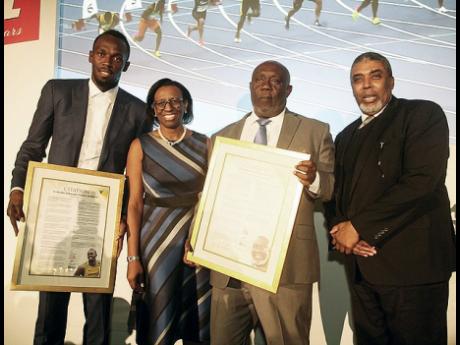 Contributed
Usain Bolt (left) and Glen Mills (third left) with their citations after collecting them from Paulette Simpson and Leon Mitchell. 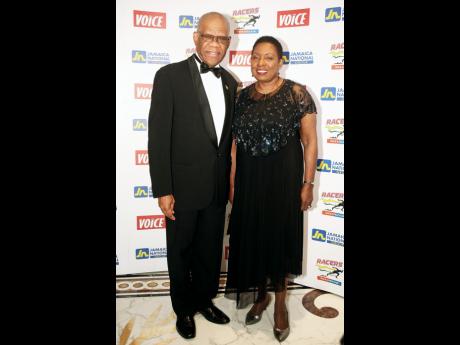 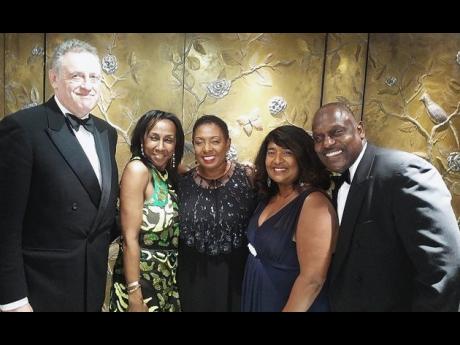 A host of British sports stars, politicians, business leaders and ardent fans were in attendance inside the ballroom of the Dorchester Hotel in London's Park Lane on Sunday, July 16 as The Voice newspaper UK and the Jamaica National (JN) Group paid tribute to Jamaica's sprint legend Usain Bolt and his coach, Glen Mills, at a charity dinner and auction in aid of the Racers Track Club.

Both men were presented with specially designed citation plaques, which outlined the contributions they have made to the international success of Jamaican athletics. The presentations to Bolt and Mills were made by Leon Mitchell, chief marketing and sales officer of the JN Group and Paulette Simpson, director of The Voice, and corporate affairs, public policy manager of the JN Group.

The charity dinner and auction were held ahead of the IAAF World Athletics Championships which will be staged in London next month. Bolt has indicated that this will be his last international competition before he hangs up his spikes. It was, therefore, a great opportunity for The Voice, the JN Group and the Jamaican UK community to pay tribute to Bolt and Mills.

Emcee for the evening was former British Olympic hurdler Colin Jackson, who also held an onstage interview with Bolt and Mills.

Bolt said he had great respect for his long-standing coach and mentor as it was his coaching techniques which made him the athlete he is today. He also said Racers Track Club was dear to him and he was thankful that everyone turned out in support of the cause to raise funds for its development.

Mills reflected on his early years in coaching and noted that he would describe Bolt as a "diamond in the rough", as he knew early on that he was a talented athlete, but had to work on a few issues before he matured into the world champion he is today. Mills also emphasised that the night's activities were important to the track club and its programme of nurturing young athletes.

Following the reading of the citations by Leon Hamilton of the JN Group and Rodney Hinds of The Voice, the presentations of the awards were made to both men. Fans then had the opportunity of taking photos with Bolt as he went around the ballroom in a marathon stint sitting at each table.

The live auction then gave everyone the opportunity to purchase sporting memorabilia, including a pair of Bolt's spikes, which were snapped up for £S10,200. Others included a seven-night holiday stay in Jamaica which sold for £S3,000 as well as tickets to the men's 100m final, which sold for £S1,500. More than £S30,000 was raised on the night.

Speaking to The Gleaner after the dinner, Bolt said: "I'm definitely happy for the cause that I hold dearly to my heart, the Racers Track Club. I have always done everything possible to promote and to show love, so I'm happy that everybody came out and really supported and dipped into their pockets to help. Special thanks to the JN Group for putting this on."

Grange, speaking to The Gleaner after the formalities said: "It was a wonderful evening, great spirit and an excellent turnout. Usain was his usual charming and sensational self. he brightened up the place. Coach Mills was humble, but also very focused in his comments. I was delighted to be here as it gave me the opportunity to meet and greet so many Jamaicans who still have Jamaica close to their hearts."