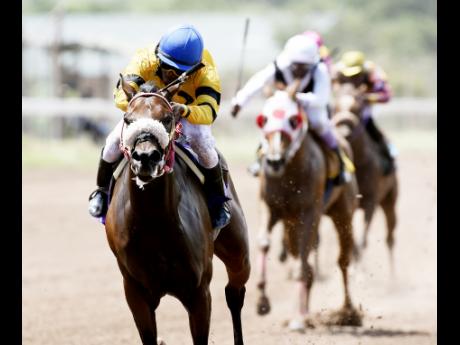 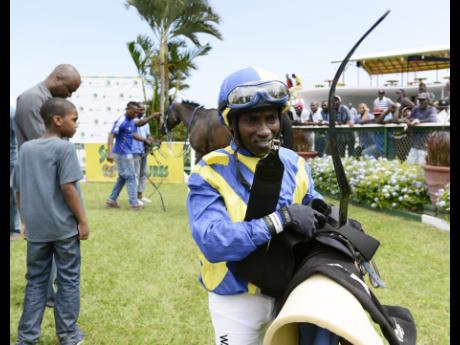 Gladstone Taylor
Jockey Wesley Henry heads to the scale after unsaddling CLEARLY OURS, winner of the sixth race at Caymanas Park last Saturday. 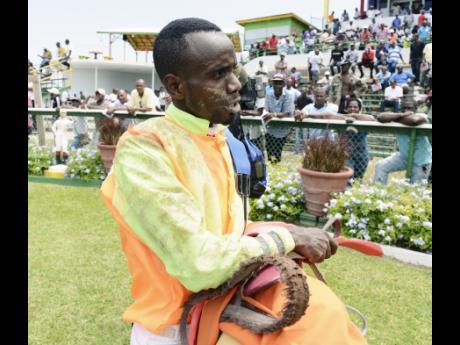 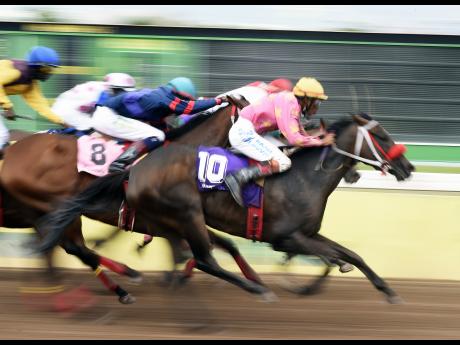 VICIOUS LOOK should give Sunrise-6 players a flying start on tomorrow's 11-race programme at Caymanas Park.

The five-year-old gelding has been knocking at the door while campaigning over various distances, from 1000 metres straight to 1820 metres, and is still to win in 2017. The conditions tomorrow are, however, perfect for the Steven Todd-trained horse in tomorrow's opening race and VICIOUS LOOK should pull off a fairly comfortable victory. He has beaten most of the field in recent starts. Recent winners HOLY LIGHT and CONNOR lack the class to provide any problems for the selection.

Race Two will also provide a lone overdue win for COMMANDING AVIATOR with his favourite rider Aaron Chatrie aboard. The five-year-old mare was claimed on June 28 and new trainer Nieve Graham has dropped her immediately to a level where she will be very comfortable. COMMANDING AVIATOR won over tomorrow's distance on April 15 clocking 1:22.0 with Chatrie aboard. Since then, she had been running against much better company than the ones she will face tomorrow.

A very poor field of quarter horses' will line up in the third over 400 metres straight. ALEXANDER has the best recent form, including a second place finish to Border Line on June 7, and should score easily.

Maiden three-year-olds will face the starter over 1000 metres straight in race four. ADORING LADY was just touched off by classic campaigner Marlene My Love over the distance on January 17. She should be too strong for MILAGRO and WILLODEEN.

Wayne DaCosta's ALEXANDER REW has been burning up the exercise tracks and is all set to clam his three-year-old rivals in the fifth, also over the straight. To be ridden by leading rider Omar Walker, ALEXANDER REW clocked 1:01.1 for 1000 metres on July 8 and that should be good enough to take care of this field. His main rivals are Philip Feanny's CARTEL and the Anthony Nunes-trained ICTUS.

THE NEXTBIGTHING finished just behind recent winner Big Paul when the two were beaten by Sure Step over 1000 metres straight on June 24 and is the selection for tomorrow's final Sunrise-6 event.

Jockey Shane Ellis selected THE NEXTBIGTHING ahead of BIG UNION, two horses which finished heads on in that June 24 race and the hint should be taken.