US top El Salvador 2-0 to advance 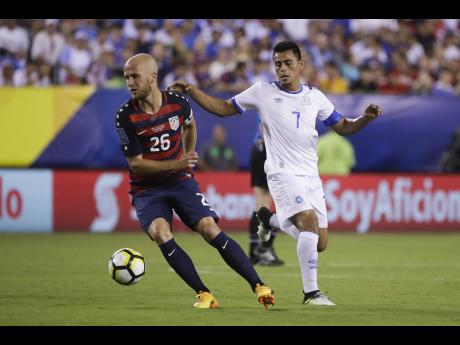 Skirmishing for position at the goal line ahead of a corner kick, Jozy Altidore could not believe what occurred: El Salvador defender Henry Romero bit the back of his left shoulder then twisted his nipple.

Altidore maintained his composure - just - and then made light of the incident.

"My girl's mad at me," the American forward said. "She's mad at me. She's mad at Romero, 'cause she's like: 'Only I can bite you; only I can grab your nipples'."

Amid the biting, twisting and talking, the US advanced to a CONCACAF Gold Cup semi-final against Costa Rica with a 2-0 win on goals by Omar Gonzalez in the 41st minute and Eric Lichaj in first-half stoppage time.

Canadian referee Drew Fischer, a Major League Soccer regular, did not penalise the incident, which occurred in the 57th minute.

Howard was called on to save the US in the third minute. Rodolfo Zelaya ran on to a terrible, lightly struck back-pass by Lichaj and, instead of striking the ball with his first touch, appeared to want to round Howard. The goalkeeper sprinted out, slid and batted away the ball with his left hand.

Gyasi Zardes was fed by Dempsey, broke in alone in the 17th and put the ball in the net, but he was ruled offside by linesman Ainsley Rochard of Trinidad and Tobago - replays showed Zardes was even with the last defender when Dempsey made the pass.

The first goal came when Bradley took a free kick from about 35 yards and sent it into the middle of the penalty area. Gonzalez, a 6-foot-5 defender, outjumped Darwin CerÈn about eight yards from the goal and redirected the ball with a glance of his head through the upstretched arms of goalkeeper Derby Carrillo.

Lichaj, trying to earn a spot as the primary backup to DeAndre Yedlin at right back, was played in by Dempsey in the second minute of stoppage time and beat sliding defender Ivan Mancia to score on an angled shot through the goalkeeper's legs from six yards. After his first international goal in 14 international appearances, Lichaj sprinted to the corner flack and, arms wide, did a belly slide.

His English wife - he plays for Nottingham Forest - and two kids are travelling to every Gold Cup match. They drove to Philadelphia from Cleveland.