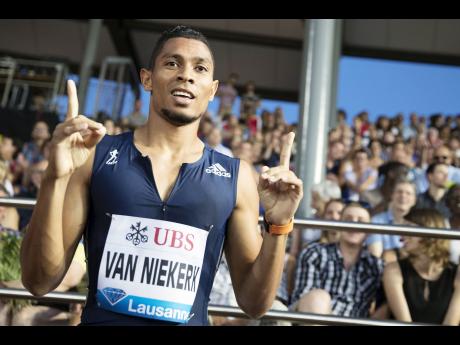 SOUTH AFRICAN World 400m record holder Wade Van Niekerk doesn't worry about beating times anymore. He just goes out there to 'do' him.

On the eve of the Diamond League event in Monaco, the Olympic 400m champion was asked if he believed that the 200m world record set by Usain Bolt in 2009 was beatable.

He said: "I don't believe in unbeatable anymore, I am just going to go out there and do me."

On his own world record time in the one-lap sprint, he didn't rule out one day running sub-43 seconds.

"If you think about it, at the age of 24 last year, running a 43.03, which is so close to running a sub (43), it is definitely something we need to aim for. I just need to have the right race, right conditions and the perfect moment and I am sure it will happen."

With many rueing the day Bolt finally hangs his spikes up, Van Niekerk was asked if he was the man to fill the void that would be left not just by Bolt as an athlete, but also by Bolt the personality.

"I've had that chat with Bolt quite a few times already," Van Niekerk admitted.

He added: "I find it incredibly difficult to even come close to what Bolt has represented with his charismatic ways, and so on, but at the end of the day, you just need to be you. I am going to go out there and showcase who I am, and at the end of the day, it is performances that will make me a great athlete.

"I am just really going to do me, and, hopefully, it will win hearts over. But I think, obviously, Usain has set the bar quite high both with his personality and his performances, so it's tough for us when it comes to the personality because he just naturally has it, but we'll see how it goes, maybe there will be some way that I come out of my shell."