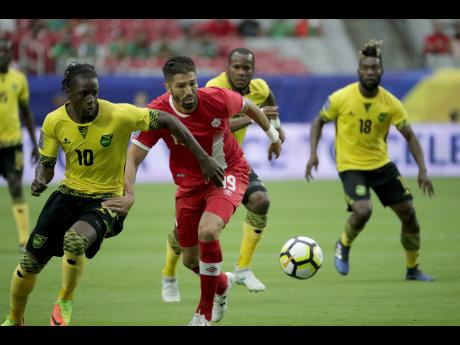 Local coaches, Rudolph Speid of Cavalier and Omar Edwards of Tivoli Gardens gave Theodore Whitmore the thumbs up for getting his tactics spot on in their 2-1 win over Canada in the quarter-finals of the CONCACAF Gold Cup on Thursday.

The Reggae Boyz defeated Canada with goals from Shaun Francis and Romario Williams to book their semi-final spot and Edwards thought Withmore's approach was 'ideal'.

"I must give the team credit for their improved performance. We managed two very good goals while conceding one. We kept our defensive shape and organisation for majority of the game, and the players are growing in confidence as the tournament progress," Edwards said.

"We won the game very early and the players and coaching staff recognised that. So keeping the team discipline and keeping the players behind the ball was the ideal thing to do. We are very quick and sharp upfront and we managed to launch a few counter attacks, which worked for us quite well, so there was no need for us to use the last 20 minutes to go out and play a high press game when we were already leading the game 2-1.

"So I think the entire coaching staff has done extremely well, in regards to getting the players to stay behind the ball and launch counter-attacks," he said.

Speid was also very complimentary to Whitmore and the team, even though he thinks the players lack experience.

"The team did well to take the two nil lead. The goals were two brilliant goals, but after we scored I don't think we played with any composure and that is because of the immaturity of a lot of the players because a lot of them don't have a lot of caps, so they didn't know how to pass out the game and they kept kicking back the ball to the Canadians.

"But I think the tactics was right. After we scored I think we held on, not looking good holding on because the Canadians got a couple of chances that they should have done better with, but they played the right way against Canada and I believe the level of confidence the players are gaining, it is possible for us to get a positive result against Mexico," Speid added.