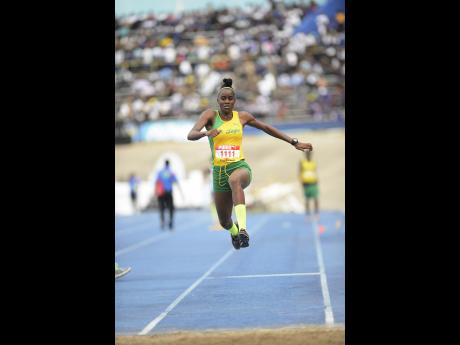 Tissana Hickling and Kevin Nedrick won medals for Jamaica on yesterday's opening day of the Junior Pan Am Championships in Trujillo, Peru.

Hickling picked up silver in the girls' long jump after finishing second with 6.36m metres. America Tara Davis picked up gold with 6.51m while Tyra Gittens of Trinidad and Tobago was third with 6.22m.

Nedrick was third in the boys discus with a throw of 58.86m. Claudio Romero of Chile won with an impressive mark of 62.09m while Turner Washington of the United States was second with 61.30m.

It was tough for Jamaica on the track. Amoi Brown clocked 13.52 seconds for fourth and Janeek Brown 13.99 for eighth in the 100m hurdles. The event was won by Tia Jones of the United States in 13.01 with her compatriot Tara Davis, second in 13.05.

In the 110m hurdles, Carifta U-20 champion Damon Thomas was fourth in 13.59 while teammate Philip Lemonious finished sixth in 13.69. American Eric Edwards Sr won the event in 13.33.

Aneka Brissett was fifth in the girls' 100m in 11.78 as Trinidad and Tobago's Khalifa St Fort won gold after clocking 11.32 relegating the American duo of Rebekkah Smith and Symone Mason to second and third in 11.55 and 11.62 respectively.

In another track final Jamal Walton of the Cayman Islands captured the 400m in 44.99 with Anthony Carpenter of Jamaica, fourth in 46.92.

The outstanding Christopher Taylor will be in action for Jamaica today in the semi-finals of the boys' 200m.