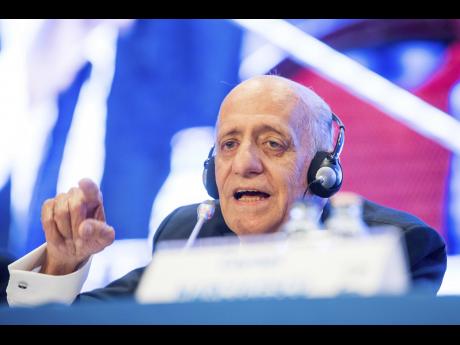 Despite fresh bribery allegations on top of long-standing accusations of wrongdoing, Kuwaiti official Husain al-Musallam was re-elected for another term as senior vice-president of swimming's world governing body, FINA, yesterday.

"Nothing happened against FINA rules. It's very difficult to do anything. We're monitoring the situation, but we have no, proof of anything," the swimming body's executive director, Cornel Marculescu, told The Associated Press.

FINA delegates also re-elected the 81-year-old Julio Maglione of Uruguay for a third term as president, two years after the organisation changed its rules to remove its age limit.

"The decision of the assembly of FINA was to decide we don't have age limits," said Maglione, who defeated the president of European aquatics federation, Paolo Barelli, for an expected victory at FINA's election congress on the sidelines of the world championships in Budapest.

Barelli complained that he wasn't allowed to speak to the bureau before the vote. He said that that essentially ended any hopes he had of persuading the governing body to make a change at the top.

Maglione has been in charge since 2009.

"You must be crazy!" he answered when asked if he planned on stepping down mid-term so that al-Musallam could take over the top position. "I was elected for four years."

Al-Musallam ran unopposed after FINA cleared the Kuwaiti official on Wednesday for re-election despite fresh allegations made by British daily The Times and German magazine Der Spiegel that he sought payoffs from sponsorship deals through the Olympic Council of Asia (OCA) in 2012.

"This is only allegations. I am a sportsman. The OCA and the committee of FINA, the committee that investigates, they did an investigation and there was no wrongdoing on anything," al-Musallam told the AP.

Al-Musallam is next in line to take over should Maglione be unable to fulfil his duties.