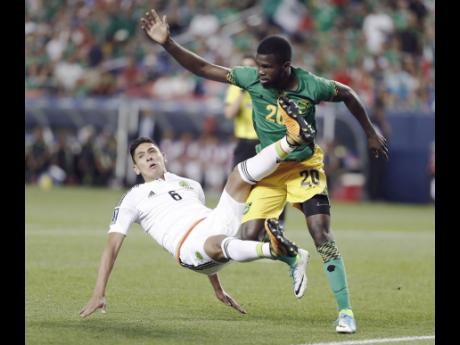 AP
Jamaica's defender Kemar Lawrence (right) in a tussle with Mexican midfielder Edson Alvarez during their preliminary round Gold Cup clash on July 13. The teams played to a scoreless tie. 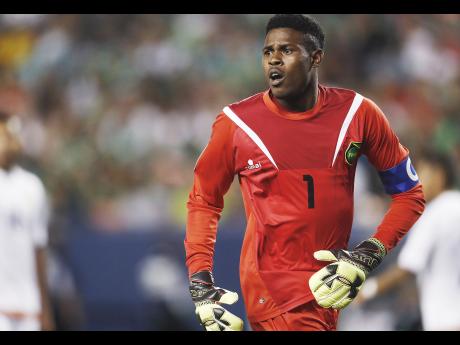 The 2017 version of the Reggae Boyz is a band that the entire country can be proud of. The beat has not been the most rhythmic, but they have done enough to remain on stage and keep some of the crowd interested.

This evening will be their biggest gig yet of the tournament when they take on Mexico at the Rose Bowl in Pasadena, California at 8 p.m.

This meeting will be their second of the tournament, having ended on even terms in the group stages. Before that, in 2015, with some older more experienced band members, the Reggae Boyz were soundly beaten 3-0 in the final. The third meeting could be the charm. At least that is what the players are hoping.

"We all know it is a very important game. All the players know this. We are on the brink of making it back to the final, and the first objective is to win tomorrow's game no matter what it takes.

"We have to go out there and be victorious," said the bandleader and goalkeeper AndrÈ Blake, who has led from the front.

In the first-round encounter, neither team lit up the stage as they played to a stalemate and each earned a valuable point. Today, there has to be a winner, and Blake is confident that his group will take the right approach.

"Mexico have a good team, and we are rebuilding as a team. We know that we have to be very patient, disciplined, and wait for our opportunities. We have the guys up front (Darren Mattocks and Romario Williams) who can get a goal or two for us, so we just have to keep it together, defend properly, and not get stretched," said the man who was the 2016 MLS goalkeeper of the year.

Twenty-six year-old Blake said that he has believed in his group since the tournament started and he has no reason to change now.

"If we all give our all and leave everything on the pitch, then we should be successful. I am not saying that we cannot lose, but once we all give everything, then one cannot ask for more," continued the man who was selected first overall by Philadelphia Union in the 2014 MLS Superdraft.

Blake, who was in the 2015 Gold Cup squad but who took a back seat to the likes of Dwayne Miller and Ryan Thompson as he was recovering from injury, identified a difference in this squad compared to the previous one.

"One of the main things is that we have a bunch of young guys in the team, born Jamaicans who have a lot to prove, are hungry for success, and we are going to out there to fight for success. We have that passion for the colours and will go out and fight for the country," he said.

He added: "I am not saying that the Jamaicans who are not born at home are not committed, but I think when you are born there and you remember where you are coming from and who you are playing for, there is that extra edge that you have."

That edge, they hope, will be sharp enough to cut down the Mexico team, which entered the tournament as joint favourites with hosts USA but which has disappointed its fans.

Mexico, with the exception of their opening game, have not been the most prolific. They beat El Salvador 3-1, drew 0-0 with Jamaica, beat CuraÁao 2-0, and edged Honduras 1-0 to earn their place in the semi-finals.

Mexico's tailing off; Blake's excellence in goal; the pace, aggression, and the confident fishing of Mattocks and Williams could give the Reggae Boyz the belief that they can steal this one.