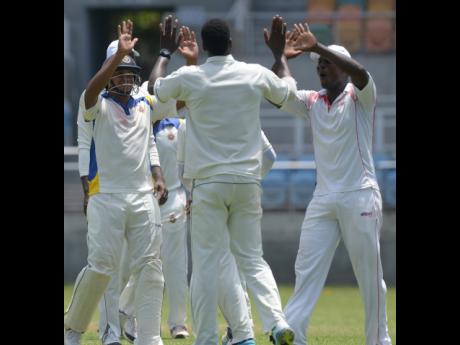 Ian Allen
Members of the Jamaica Defence Force team celebrates after Andre McCarty was bowled for a duck by Joseph Palmer on the first day of the 2 days Senior Cup finals against Melbourne at Sabina Park on Saturday.

JDF, who are capturing the two-day title for the third time in four years, ran out victors after first toppling the dethroned champions for 103 in their first innings and 233 for nine in their second.

The army men posted 244 in their first innings and 94 for six in their second.

"It was a hard-fought game, and I am glad that in the end, we came out on top,'' said JDF captain Damian Grey.

"Our bowlers first gave us a good start in restricting Melbourne to a low first-innings score, and collectively, our batsmen played their part.

"We relinquished the title last season, but we were determined to regain, and through hard work, dedication and determination, we were able to.''

Resuming the second day in a fairly comfortable position at 210 for six for an overall lead of 107 runs, the JDF lower order wagged a bit, and in the end were able to stretch their lead to 143 runs.

Batsman Sean Bennett, who was not out 63 overnight, went on to post a top score of 72. Rasheed Outar, 58, and Joseph Palmer, 31, were the next best scorers.

Captain Nikita Miller, who had three for 55 overnight, went on to finish with figures of five for 60, with spin partner Damion Jacobs, three for 65, providing support.

Needing to score quickly and in the process post a respectable total to defend, Melbourne got a fiery start when openers Trevon Griffith and Tarique White put on 70 for the first wicket inside the first eight overs.

However, as they did in the first innings, the Andrew Richardson-coached Melbourne failed to capitalise, and after losing wickets at regular intervals, were only able to set the JDF a modest 93 for victory.

The soldiers, led first by a shepherding knock of 19 off 51 balls from Outar and later an unbeaten 20 off 36 balls from Grey, then guided their team to victory much to the delight of the vocal fans who stormed the field afterwards.

"Congrats to the JDF,'' said Miller. ''They did well in the first innings to bowl us out and never really allowed us back into the game.'

"It's a disappointment for us as we worked hard all season long and wanted to defend our title. But that's just how the game goes at times. We will have to rebound and come back next year.''