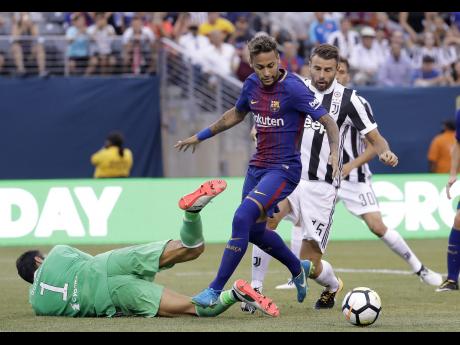 Denials from Barcelona are doing little to halt the fervour that Brazil star Neymar could be joining Paris Saint-Germain in a transfer that more than doubles the world record.

Neymar is still playing for Barcelona, warming up for the new season by scoring twice against Juventus in a friendly on Saturday.

But Neymar left the stadium in New Jersey without saying anything to reporters, allowing speculation he will imminently join PSG for €220 million (US$253 million) to persist.

The Barcelona coach and president have been more willing to speak, and both are adamant the mercurial forward is staying put.

"We want Neymar to be with us," Barcelona coach Ernesto Valverde said after the 2-1 victory over Juventus. "We know the importance he has in our game, our dressing room, the team dynamic, and we want him with us. It's clear."

Barcelona's league campaign begins on August 20, while PSG's season opener is in less than two weeks, on August 5.

Reports in Spain and France state that the transfer could be completed by the end of July.

'Un Pari Magique' ('A Magic Gamble') read the front page headline on sports daily L'Equipe on Saturday. It was accompanied by a photo of Neymar with his hand on his forehead like a ship's captain, gazing into the horizon as if longingly eyeing a future destination.

The headline is a play on words with the favorite chant among PSG fans of 'Paris est Magique' ('Paris is Magic').

Not magical enough to win the Champions League yet, or even advance past the quarter-finals in the past four seasons. To challenge for European soccer's top prize, coach Unai Emery told L'Equipe earlier this week: "PSG must have one of the top five players in the world. We are looking to sign one this summer."

Neymar certainly fits the bill. While not at the level of Barcelona star Lionel Messi or Real Madrid's prolific Ronaldo, the 25-year-old Neymar has longer left at the top and has not even reached his peak. Should PSG sign Neymar, the transfer would smash the previous world-record fee of €105 million (then $116 million) that Manchester United paid a year ago for France mid-fielder Paul Pogba.

It would be a massive coup for Emery, given his troubled first season.

PSG relinquished its league title to Monaco and made unwanted history by becoming the first team eliminated from the Champions League knockout stages, having won the first leg 4-0. PSG lost 6-1 away to Barcelona in the last 16, with PSG's tormentor being Neymar.