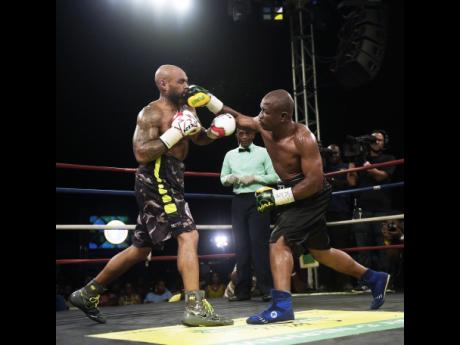 Gladstone Taylor
Devon ‘Concrete’ Moncriffe lands a right hand on Canadian Winston ‘The Punisher’ Matthews during their professional undercard bout ahead of the Wray and Nephew Contender Series semi final at the Mico University College on Wednesday, July 5. 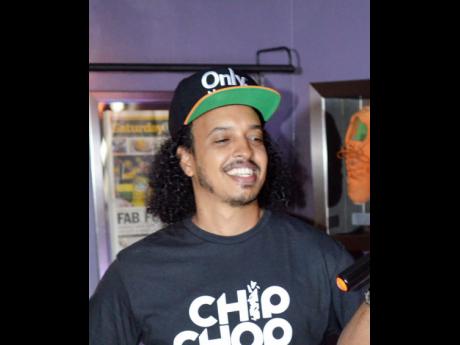 Promoters of the Wray and Nephew Contender Series will meet to decide how to handle the clash that has been caused between the competition's grand final and the CONCACAF Gold Cup final, which sees Jamaica and the USA kicking off at around the same time as the event tomorrow night.

The Reggae Boyz will play the US at the Levi Stadium in Santa Clara, California, at 8:30 tomorrow night, and although the Contender does not start its live broadcast on Television Jamaica until 9:30, the undercard bouts take place an hour earlier.

One of the show's promoters, Sanjay Ramanand, said that he was not worried about the football match affecting crowd turnout for the Contender as true lovers of boxing will make their way to the Mico University College to watch the fights anyway.

Not going stop you

"It can't be great, but at the end of the day, I feel like if you were planning to come to the Wray and Nephew Contender final, that's not going stop you," Ramanand said.

However, Ramanand said that the closed-circuit screens at the venue, used to allow viewers see what is taking place on television during the live broadcast possibly could be used to keep patrons updated on the Gold Cup match throughout the night.

"That's something that probably has to be discussed in general, but it might be possible," he said. However, he said that the logistics of making simultaneous viewing possible will come down to whether FLOW Sports, which has broadcast rights to the Gold Cup locally, will allow it. But he said that a meeting would be arranged with organisers to figure out the best way forward.

"It's something that might pose problems because that's FLOW's televised event. It's hard for me to answer one way or the other because that's a decision that will have to be made collectively," he said.