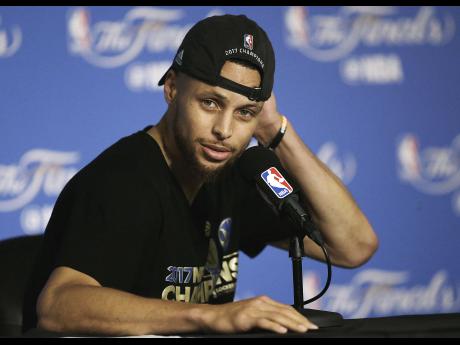 Stephen Curry has delivered his share of success already to a franchise that desperately needed it. Now, he's being paid for all he has done — and certainly will do.

Curry finalised his new contract yesterday, signing a $201 million, five-year deal with the champions Golden State Warriors that initially was the richest ever, until James Harden topped it with a $228 million extension from the Rockets.

Considered overlooked and undersized when he arrived on the NBA scene after being drafted seventh overall out of Davidson College in 2009, Curry has silenced the doubters with every spot-on heave from half-court.

The two-time NBA MVP, who earned $12 million this season as one of the league's biggest bargains, averaged 28.1 points in the playoffs while also contributing 6.7 assists and 6.2 rebounds. Now, he will earn $40 million per season.

"Just happy to be a leader on this team that can understand the goals that we set out for ourselves and try to get it done the best way we could," Curry said immediately after the Game 5 title clincher in the NBA Finals last month.

Sure, Durant's spectacular postseason may have shined brighter as he hoisted his MVP hardware, yet Curry did so much on the way to his second title in three years. From his dazzling dribbling, shot-making and the way he dishes off, Curry has been brilliant — but what he does for the Warriors as an ambassador in the community is as much a part of what makes him  special as anything else.

He is the face of a franchise that has become the standard by which every other organisation is measured.

When coach Steve Kerr was asked in early April about how Curry had taken on more of the load with Durant nursing a left knee injury, the 2016 Coach of the Year touched on his point guard's unfailing ability to guide Golden State.

"I don't think he's been any different with KD out in terms of his leadership. He's still just Steph," Kerr said. "He's humble and cocky at the same time, which is why we like him. He's a very humble, modest human being, which the guys respect. And he's an arrogant basketball player, which is what you need to be a superstar. He believes in himself and he goes out there looking to light it up every night. You take him off the floor you won't find a kinder, gentler human being. It's a pretty powerful force."