Follow The Trace | Lessons from the Gold Cup run 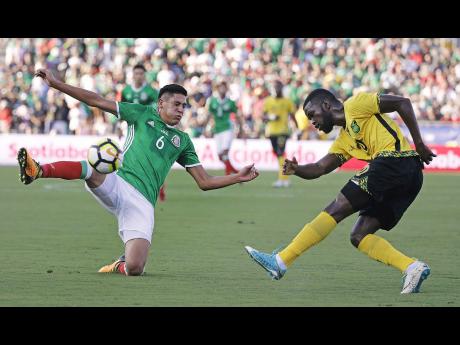 AP
Mexico's Edson Alvarez (left), and Jamaica's Kemar Lawrence battle for the ball during the first half of a CONCACAF Gold Cup semifinal match in Pasadena on Sunday.

Jamaica's Reggae Boyz' return to the grand final of the CONCACAF Gold Cup is of much more significance to the wider development and forward thrust of our football than our first appearance in the decider of the 2015 version of the region's elite football tournament.

The memories are vivid of the excitement and near euphoric response to the Reggae Boyz under the guidance of German coach Winfried Schafer and dominated by foreign born and based players getting so close to be crowned champions of the confederation of Central America, North America, and the Caribbean for the first time. There was even the warped notion articulated by many then, that the 2015 team was the best Jamaican football team ever.

Tappa to pick up the pieces

Fast forward to 2017, local based coach Theodore 'Tappa' Whitmore in his second stint on the job asked again to pick up the pieces after Sch‰fer's dismissal. A young and inexperienced team stacked with all local born players a team with five or six games played together as a unit, including a tame surrender of their Caribbean title.

The clouds of doubt hanging of the Gold Cup bound Boyz were exacerbated somewhat by the untimely loss of the inimitable long time Jamaica Football Federation president Captain Horace Burrell. No one gave Whitmore and this group a ghost of a chance to even get past the first round, much less getting back to the final of the Gold Cup.

In the aftermath of the 2015 performances, the section of the football fraternity who had long had very little, if any faith and belief in the talent and innate qualities of the local born players, thought they had impregnable evidence to show that "begging trips" to England was the only way to go. Thanks to the 2017 group, order and faith has been restored in Jamaican born and bred talent.

It ought never to have come down to a situation of "either/or" as it related to the foreign born and based players or the local born players. It should have always been a matter of assembling a team with the right balance to best represent Jamaica regardless of where the players were born or based.

EGOS IN THE WAY

Unfortunately, egos and the need to prove who was right and who was wrong got in the way of good sense as Jamaica's football kept swinging like a pendulum from the foreign born and based extreme to the local born and based extreme, while the overall efficiency and effectiveness of the team continued to suffer.

The call must still be for balance. It will always be a challenging and meticulous task to strike that balance, but this continues to be the task at hand. The performance of the current team must not be seen as a winning moment, but more so a reminder to those who need reminding, that local born players have positive qualities that can help to drive the positive process of progress.

Another important lesson to be learnt from the 2015 run, not to be repeated after this 2017 run is to ensure that the dramatic falling apart of the ensuing World Cup campaign and that the priority remains a credible run at World Cup qualification.

Schaefer woefully failed to strike the balance between the Gold Cup and Copa America tournaments and the vital importance of the World Cup qualifying campaign. The fact that World Cup qualification remains the ultimate goal, and that the qualifying campaign itself is the proverbial engine that drives and finances the entire football program got totally lost on Schafer. Let us hope it does not get lost on Whitmore as well, even as we say good luck to the team on Wednesday.