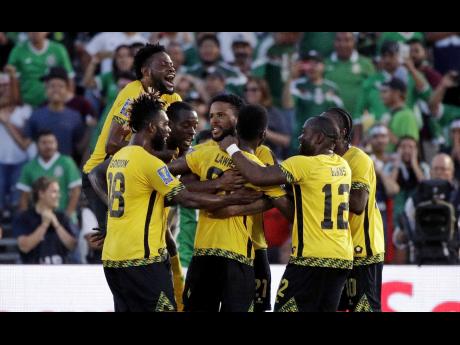 AP
Kemar Lawrence (centre, back to camera) is congratulated by teammates after his goal against Mexico which put Jamaica into today's CONCACAF Gold Cup final.

The Reggae Boyz will start as the underdogs in this the final of the 2017 CONCACAF Gold Cup at the Levi Stadium in Santa Clara, California, at 8:30 p.m. Jamaica time. And that could just be the way they want it.

Heading into the tournament, not much was expected of them until they swept away the 'Maple Leaf Lads' of Canada in the quarter-final. People were still not convinced that they would have passed the semi-finals. The overwhelming underdog status or unfavourable views of them clearly fired them up, and having cut down 'El Tri', this small axe is sharpened and ready to cut down another big tree.

country was in the semi-final round of the 2015 Gold Cup. That rare win for the Reggae Boyz did not go down well with the American team or their fans, and revenge has been on their minds since.

Having started shakily before stabilising themselves to progress to the knockout stages, the Americans bolstered their ranks with the 'big guns' as the rules permitted. The Reggae Boyz, on the other hand, kept the faith with their soldiers.

Among these soldiers are some who operate within the United States when not fighting for country, and they will have a major role to play in keeping the rest of the troops together as they and their comparatively small band of supporters face hostile fire in enemy territory.

Besides the obvious importance of captain and goalkeeper AndrÈ Blake, who has hardly made a wrong move all tournament, Jermaine Taylor, the longest serving and most experienced player in the squad, will have a big job. He has anchored the defensive line well and will have to ensure that the other members - all of whom ply their trade in the US - continue to march to the same beat.

This battle will also be significant for Taylor as he was sharpest player in the squad in 2015 before he got injured and had to fly home. He was powerless to help them then as the team succumbed to Mexico. He will want to make this right.

Midfielder Je-Vaughn Watson, another veteran fighter, who, like Taylor, could be in his last Gold Cup, will be the man that Kevon Lambert and the other midfielders will be looking to for leadership when they go up against captain Michael Bradley and company..

Darren Mattocks has led the line with good support from Romario Williams, and that approach and posture should not change as they fight their biggest fight yet.

A first Gold Cup victory for Jamaica would be most special as not only will it elevate or re-elevate coach Theodore Whitmore to hero status, but would validate the Jamaican football mind as the entire coaching/administrative staff is Jamaican.