Hubert Lawrence | Bolt : On his way back and out 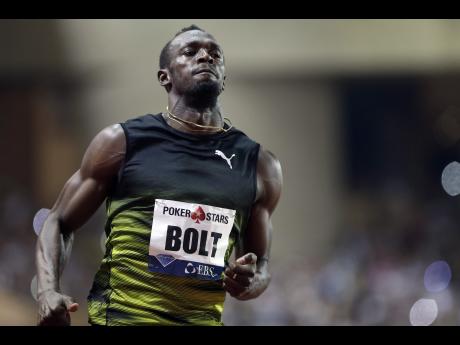 The public still expects the world from Usain Bolt. That has been made clear to me twice in the last few weeks. The depth of. the sky high expectations appeared just before his run at the Racers Grand Prix and just after the great man raced last week in Monaco. I was en route to the National Stadium on June 11 for the Racers meet when I alighted from an automatic teller machine in the big parish of St Catherine. As I set to continue my journey, a taxi-man asked, "So a whey Bolt agu gi we tonight, 9.7?" I explained that it was to be the tall man's first 100 metres race of the season and that he had broken training in the aftermath of the tragic death of his friend Germaine Mason, the 2008 Olympic high jump runner-up.

My taxi-man friend wasn't too enthused with my estimate of a time around 10 seconds flat. He hoped for a Bolt blast in his final race on home soil. Alas and alack, Bolt's winning time was 10.03 seconds.

Fans were unmoved by his clocking of 10.07 seconds in Ostrava not long after. After some treatment for his back, Bolt ran a controlled race in Monaco last Friday. The effort lasted 9.95 seconds. Though the reigning world 100 champion broke 10 seconds for the 50th time, fans again seemed to have expected more. It appeared that Bolt tried to win without running to the redline. Second placed Isiah Young was only 0.03 behind but was going hard while Bolt's wide open stride was on cruise control.

Young won't be in London for next month's world Championships. Behind him and behind Bolt were two others who will be in London - Akani Simbine of South Africa and Britain's Chijindu Ujah.

Those who accosted me after that run weren't impressed. They worried that Bolt had dodged the fast Canadian Olympic bronze medallist Andre De Grasse. When I explained that Christian Coleman had set his world leading time of 9.82 seconds last month in sprint friendly Eugene and that he had since lost to Justin Gatlin in a slower time at the US Trials, they just kept on worrying.

2015 and 2016 must be light years away. In both those seasons, Bolt overcame injury and modest early results to win when it counts. To tell you the truth, the only sprinter who has looked consistently good in the 100m is Yohan Blake. Had he not suffered some sort of injury niggle that knocked him out of the Rabat Diamond League meet, he'd be the one Bolt would fear most.

He might still be the danger if he is 100 per cent fit in London.

His wins at the Jamaica Invitational - 9.93, the Racers Grand Prix - 9.97 and at the National Senior Championships - 9.90 seconds were all achieved with something to spare.

That time of 9.90 seconds is the number two time in the world this year.

Bolt's Monaco race and his well-known big meet prowess should have indicated that he has nothing to fear and that he could well be in winning form on London. That doesn't mean that there will be a world record. After all, his times in the 2015 World Championships and at the Olympics last year are his slowest big meet times ever.

What it does mean is that no one should write the tall man off.