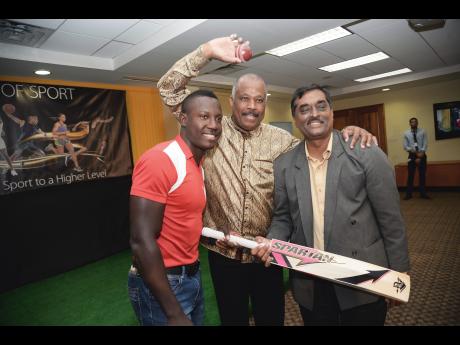 The University of the West Indies (UWI) officially launched its new Faculty of Sport at the Mona Campus yesterday. This is the first faculty established by the institution since the Faculty of Law, 40 years ago.

The faculty will begin operating in the upcoming school year, 2017-2018 and will offer certificate, bachelor and master's degrees in Sports Business, Sports Management, Sports Science and the Art and Science of Coaching.

Dr Akshai Mansingh, who had been serving the university in the role of director of sport medicine will become the faculty's dean as of August 1. He said the university can now prepare individuals to become leaders in sport worldwide.

"The creation of the Faculty of Sport gives an opportunity to bring together all the creative and scientific minds of the region, while harnessing leaders in sports, in all aspects of sports and throughout the world," he said. "It doesn't only cater to those who play sports but also to those who play at sports; creative academic minds with an interest in sports to have an opportunity to pursue their research. And practitioners such as coaches, conditioning experts and sports physiotherapists."

"The times when a teacher would say: 'You don't want to be a lawyer, a doctor, an engineer, you only want to do sports?' Those days are over. The sports professionals you just have to listen to the transfer fees. They can buy all the doctors, engineers and the lawyers in the Caribbean," Patterson said.

UWI Vice Chancellor Professor Sir Hillary Beckles, who played professional cricket in his youth, agreed with Patterson. He said that he wanted to change the perception that the only way to be successful in life is through academia.

"My parents said 'No way ( him playing cricket), we are a working class family, you're about to become the first university student in the history of our family. You are going to university, do your A Levels and go to university,' Beckles shared. "My heart was to become a cricketer, and I decided there and then that whatever I can do, no child should have to choose. The Faculty of Sport is here today to send that message."

UWI's council had set up a task force to put a structure in place for the faculty. This structure will see four academies of sport created, one for each of its four main campuses in Mona, Jamaica; St Augustine and Debe (under construction) in Trinidad and Tobago, and Cave Hill in Barbados.

Beckles added that the university will also look to raise US$70 million to improve the facilities at the institution as part of next year's 70th anniversary celebration.