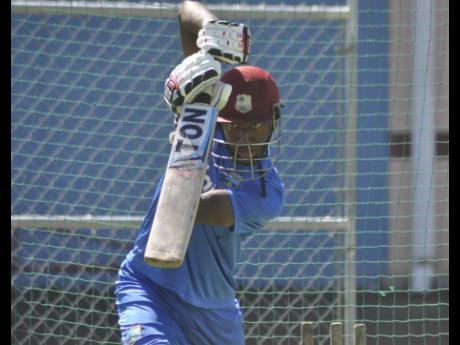 A batting meltdown cost West Indies Under-19s another morale-boosting series win as they crashed to a 26-run defeat to Zimbabwe Under-19s in the second Youth One-Day International of the three-match series here yesterday.

Chasing a modest 237 for victory, the Caribbean side were well placed at 155 for four in the 34th over, but lost their last six wickets for 55 runs, to collapse to 210 all out in the 45th at Peterhouse School.

Opener Keagan Simmons top-scored with 49, while Alick Athanaze got 46 and Matthew Patrick and Bhaskar Yadram, 42 apiece.

But they all perished after seemingly well set and no other Young Windies batsman managed to make it into double figures.

Seamer Dion Mazhawidza was the best bowler with three for 44 while off-spinner Taun Harrison finished with two for 34.

Zimbabwe had earlier raised 236 for nine off their 50 overs with Ryan Murray stroking 59, Dion Myers hitting 45 and Wesley Madhevere, 38.

Sent in, Zimbabwe were stumbling at 64 for three in the 12th over before Murray and Myers came together to add 78 for the fourth wicket.

When they were separated, Myers found an ally in Madhevere - who produced a breezy 39-ball innings with three fours to post a handsome 39 for the next wicket.

The Young Windies had a terrible start to their run chase, losing Joshua Persaud (0) and captain Emmanuel Stewart (2) inside the first two overs to slump to eight for two.

However, Simmons anchored two successive stands to revive the innings and put the Windies back on course for victory.

He added 66 for the third wicket with the inform Yadram, who struck four fours and a six off 56 deliveries, before posting another 45 for the fourth wicket with Athanaze who faced 60 balls and counted six fours.

Simmons was fourth out in the 25th over after facing 63 deliveries and hitting six fours but Athanaze and Patrick added a further 36 for the fifth wicket to keep the run chase alive.

Zimbabwe struck two key blows when they claimed Athanaze and Jeavor Royal (0) three balls part in the 34th over with no runs added to leave the Windies struggling on 155 for six and even though Patrick and Joshua Bishop (9) added 39 for the seventh wicket, the tourists ran out of steam as the last four wickets perished for 16 runs.

The final game is set for Saturday in Harare.