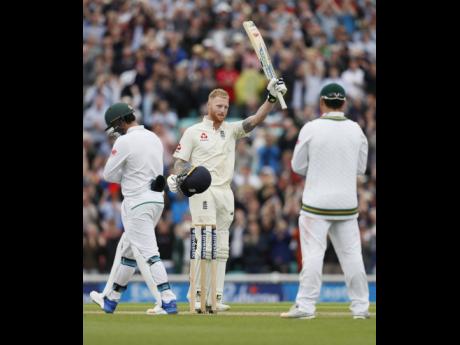 AP
England's Ben Stokes (centre) celebrates getting to a 100 runs on the second day of the third Test match between England and South Africa at The Oval cricket ground in London yesterday.

Debutant England bowler Toby Roland-Jones ripped through South Africa's top batting in the second Test yesterday, taking four wickets as the tourists collapsed to 126 for eight at the close, losing seven wickets in the final session of the day.

Responding to England's first-innings total of 353, the 29-year-old Roland-Jones removed both openers and then claimed the key scalps of Hashim Amla and Quinton de Kock in his first Test for England.

Experienced seamers James Anderson took two for 6 and Ben Stokes, who earlier in the day scored a sparkling century, and Stuart Broad, each took one wicket, leaving South Africa facing defeat in the third of the four-match series. The series is currently tied 1-1.

Temba Bavuma and Kagiso Rabada put on 53 for the eighth wicket, but this was the only resistance.

Vernon Philander, the pick of South Africa's bowling on the first day at the Oval, sent down five overs but then left the field again for treatment, apparently for a stomach ailment that also forced him off the field on the first day.

It was later reported that Philander had been admitted to hospital. He could bat today if he has recovered.

The tourists' bowlers could not match the control of the seam, and Stokes drove England to what now looks like a strong first-innings total.

Stokes hit 112 in 153 balls, reaching and passing his century in dramatic fashion by smashing three consecutive sixes off the bowling of spinner Keshav Maharaj.

The England left-hander had resumed yesterday with opener Alastair Cook, who added just six runs to his overnight 82 before Morne Morkel beat his bat and trapped Cook leg before wicket, 12 short of a 31st Test century.

Resuming on 171-4, England advanced to 269 for six at lunch as Stokes and Bairstow shared a 75-run partnership.