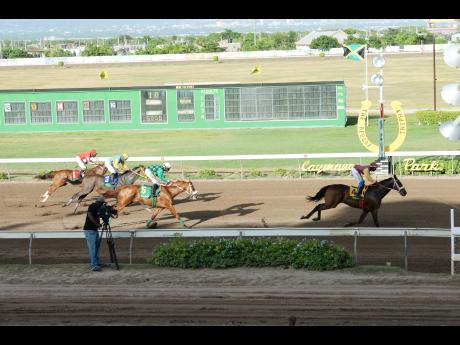 CAMPESINO returned to the winners' enclosure yesterday, turning the tables on TALENTED TONY K, who led and weakened into last place in the 1000-metre straight Reggae Trophy.

TALENTED TONY K had beaten CAMPESINO in the May 27 Lotto Sprint and was hoping to close a hat-trick after winning his follow-up race at 1000 metres straight on June 7.

CAMPESINO, the reigning sprint champion, had completed a hat-trick of wins before losing the Lotto Sprint to TALENTED TONY K.

Sent to post as the second favourite at odds of 3-2, seven-year-old CAMPESINO tracked the battling pair of TALENTED TONY K and KING D, who set blistering fractions of 22.2 and 45.4 to the last furlong.

CAMPESINO, a chance ride for two-kilo claiming apprentice Dane Dawkins, used his class to quicken past the pair and stayed on well to hold late-closing Horse of the Year SEEKING MY DREAM, who performed creditably in his first run for the year.

The Philip Feanny-trained gelding covered the distance in 59.2, beating SEEKING MY DREAM by two-and-a-half lengths, redeeming himself after encountering traffic problems and finishing second behind HOUDINI'S MAGIC at 1400 metres two weeks ago.

GARY GLITTER finished third, a length ahead of fourth-place KING D while TALENTED TONY K weakened badly inside the final half-furlong in the five-horse field.

TALENTED TONY K's trainer, Patrick Lynch, failed in his bid for a four-timer on the 11-race card after landing ACAPULCO, SWEET DIMENSION and DWAYNE STAR in the fourth, eighth and ninth events, respectively.

Aaron Chatrie partnered ACAPULCO and SWEET DIMENSION while Wesley Henry was aboard DWAYNE STAR. Both jockeys rode two winners on the 11-race card.