Fresh faces: Half of US roster could change for WCup 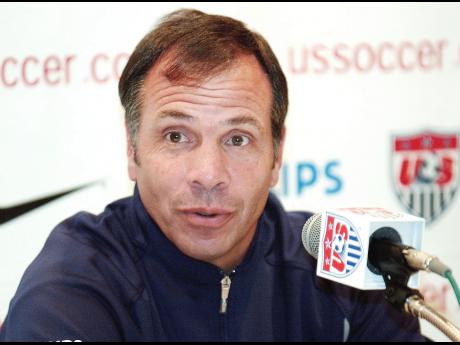 US coach Bruce Arena has used 48 players during a 14-game unbeaten streak since replacing Jurgen Klinsmann last November, including seven who made their national team debuts.

There could be many fresh faces for next year's World Cup, led by teenager star Christian Pulisic. Arena's roster projects to include only about half the players who made the trip to Brazil in 2014.

"We've made progress, but we have a long way to go," Arena said after the Americans beat Jamaica in the CONCACAF Gold Cup final on Wednesday night. "Doing this well past midstream, I found to be a difficult challenge."

Bradley has been dropped into a deeper defensive midfield role, while Johnson has been established in wide midfield instead of his repeated shuttling between there and the back line. Dempsey, back from heart procedures at age 34, has been transitioned from a regular to a spot starter and second-half substitute.

"Clint has been fantastic in the role we gave him the last two games," Arena said.

The coach gave Villafana his international debut, and the 27-year-old has become the first-choice left back. Acosta has seen substantial playing time in defensive midfield. And after getting dropped by Klinsmann, Nagbe has returned and earned Arena's praise for his play on the midfield flanks and in the centre.

"He never loses the ball," Arena said. "We want to get him a little bit more assertive in the final third of the field."

Arena used 27 of 29 players on his Gold Cup roster, experimenting in the group stage and using a B-plus team in the last two games, when he started the same line-up for the first time in 11 matches since his return.

"When you play on the international level in big moments like this, you've got to raise your level," forward Jozy Altidore said. "I thought they were exposed to that and I thought a lot of them responded really well. It's not easy your first time around."

After a 0-2 start in the final round of World Cup qualifying, the Americans are third in the six-nation round and appear on track to qualify for an eighth straight World Cup. Qualifying resumes September 1 against Costa Rica at Harrison, New Jersey, and selection of a World Cup roster is about 10 months away.