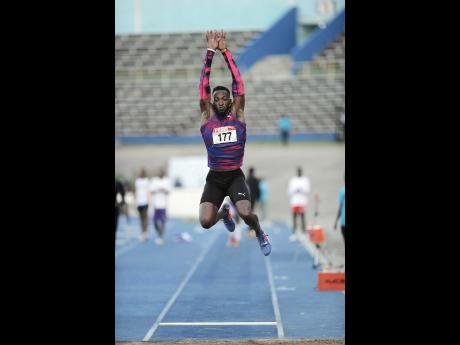 An eighth-place finish at the 2013 World Championships in Moscow is the 26 year-old's best performance to date on the sport's big stages and a year after ending in 12th place at the Rio 2016 Olympics, in what is his only other appearance in a final, Forbes feels he will be in a position to improve his output in the coming days.

"It's been time for a long time, but you can never put your mindset on how you feel come championship time and, unfortunately, for me, I have been injured most of the time heading into championships," Forbes reasoned in the build-up to the August 4 - 13 World Championships in London.

"When I am healthy, I can do great things, so that's the focus - to stay healthy and not to chase anything and just go out there and do what I can do," Forbes added.

It has been a positive year for the jumper, who posted his best jump in four years with a personal best 8.29m mark in Hengelo, The Netherlands, last month.

"It was nice getting a personal best this year. It was a long time coming, but I am not satisfied because I feel like I have more to come, and we will see what happens (at the World Championships)," Forbes said.

"I just want to be able to put out my best at the championships because I know that is where it needs to happen."

In his last competition, Forbes jumped 7.92m at the London Anniversary Games in the same pit where he will be competing in at the World Championships at the London Olympic Stadium. Last year, at the same meet, he jumped 8.05m and is looking forward to another positive leap on the opening day of competition when the long jump event gets underway.

"I really like this track. It reminds me of what I practise on at LSU (Louisiana State University) ... , so I think I will be fine at the championships," he said.

Forbes has jumped over 8m in three of his nine competitions this season.