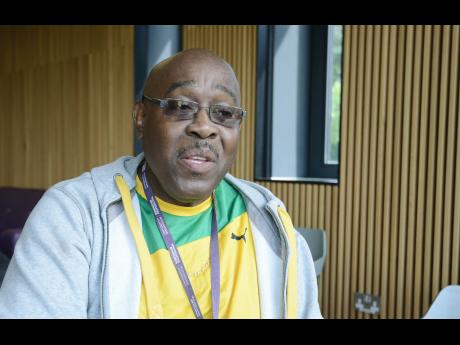 Ricardo Makyn
Team Jamaica manager Ian Forbes at Jamaica's training base at the University of Birmingham in Birmingham, England, ahead of Friday's start of the IAAF World Championships in London.

Ian Forbes, manager of Jamaica's team to the IAAF World Championships set for London, is expecting a strong performance from the island's athletes despite the transitional nature of the squad, given the absence of several standout performers over the past few years.

Big names such as Asafa Powell and Veronica Campbell-Brown, who have both had injury issues this season, along with Shelly-Ann Fraser-Pryce, who is expecting her first child in the coming days, are among those absent from this Jamaican team.

However, Forbes, who noted that the squad's more inexperienced athletes have received some mentoring since their arrival at the pre-championships camp currently taking place at the University of Birmingham, also believes that the youngsters are motivated to deliver a positive campaign for the country.

"It's working very well. We are somewhat in a stage of transition. A lot of our stalwarts, some have indicated that they are at the end of competing, and, of course, we have the very talented young ones coming up, and I think there has been a certain amount of mentoring that is taking place as well, so the vibe has been good," Forbes told The Gleaner yesterday.

Over 30 per cent of Jamaica's team to London 2017 consists of first-time participants at a senior global championship.

"Based on my observation, training has been going exceedingly well. I think the athletes are motivated, the hospitality has been perfect, and I think with all those ingredients, I am expecting a very good performance. I am not predicting the medal count, but I am expecting them to do exceptionally well in this championships," Forbes added.

Forbes was also full of praise for the facilities, which include a freshly-laid track and a new £550 million sports and fitness centre, which among other facilities, have both been made available to the team here.

"The hospitalily has been very good. The University of Birmingham, the Birmingham City Council, the High Commission, and GraceKennedy have all been extremely supportive," he noted.

"With respect to training facilities, there is a brand- new training track. I had doubts when I made a site visit in February that it would be complete - it was all woodlands - and to come and see such a great facility is amazing. There is a sport and fitness centre, which must be one of the best in the world, and it features an Olympic-sized indoor swimming pool, laboratories, courts, gymnasium - you name it; really state of the art facilities. So all in all, I would say things have been excellent," Forbes said out.

The Jamaicans will head to London tomorrow ahead of the championships, which run from August 4 - 13, at the London Olympic Stadium.