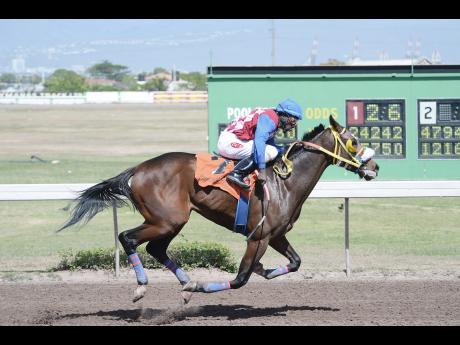 Jermaine Barnaby
Shane Ellis aboard ANOTHER BULLET, who is expected to provide a close race for BUZZ NIGHTMARE this afternoon.

GOLD Cup winner BUZZ NIGHTMARE returns from a near eight-month lay-up in this afternoon's 1100-metre Betting Gaming and Lotteries Commission trophy, reporting down in class among open-allowance rivals.

The speedy five-year-old h races for the first time since December's Diamond Mile, which he led for six furlongs before defending champion SEEKING MY DREAM pounced to make it two in a row with a scintillating five-length win.

BUZZ NIGHTMARE's rivals include race-fit runners such as United States-bred CHOO CHOO BLUE, ANOTHER BULLET, MR BUDGET and CHACE THE GREAT, but none with the class of the Philip Feanny-trained speed demon.

Horse of the year

After winning the Gold Cup, turning back Horse of the Year SEEKING MY DREAM, from whom he had received 16lb, BUZZ NIGHTMARE seemed ready to rule the world with what appeared to be a formality in November's Caribbean Sprint.

However, a combination of joint topweight 57.0 kilos and, possibly, his old bleeding problems returning to haunt him, resulting in a shock loss to stablemate CAMPESINO at 1200 metres.

Brought back a month later for the Diamond Mile, an auspicious attempt with 121lb, BUZZ NIGHTMARE disputed the lead to the home turn, but had nothing in the tank when SEEKING MY DREAM pounced at his pet trip. However, the brave speedster was still third by four lengths at the furlong pole, having 13 horses behind him, before weakening into 11th place.

A horse who relishes running fresh, BUZZ NIGHTMARE has been working like the grade-one animal he is renowned to be, blazing a flat 59.4 on the round earlier this month before winding down with separate half-mile (47.0) and three-furlong gallops out the straight in the last two weeks.

At 1100 metres, BUZZ NIGHTMARE should be floating like a butterfly down the backstretch and stinging like a bee in the straight when asked to run by veteran jockey Ian Spence.

Even with the weights against him, he is down a class from his natural level, grade one, a rating which doesn't disappear after eight months off.