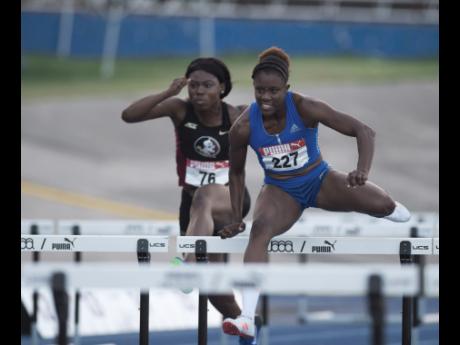 Gladstone Taylor
Danielle Williams (right) wins the 100m hurdles ahead of Peta-Gaye Williams, who was eighth, at the JAAA National Senior Athletics Championships at the National Stadium in June.

YEARS ago, Jamaica's female sprint hurdlers were forces to be reckoned with at the international level as the likes of Brigitte Foster-Hylton, Delloreen Ennis-London, Dionne Rose-Henley, Michelle Freeman, and Lacena Golding-Clarke were right there among the best in the world as they made their country proud whenever they took the track.

With their exit, there were hopes that the trend would have continued immediately after they hung up their spikes as the likes of Latoya Greaves, Nadina Marsh, Natasha Ruddock, Shermaine Williams and company would easily have filled that gap. However, despite good results at the junior level, their transition to the senior stage did not materialise, and for several years, the country's female hurdlers were struggling and there were signs of panic all over the country.

However, over the past three years, things have changed significantly, and the future does look bright for the country with former Queen's School standout Danielle Williams leading the way. Despite not medalling at the junior level in the 100m hurdles at an international meet, with only a close fourth-place finish at the 2010 World Junior Championships in Moncton, Canada, being her best result, she has stepped up well at the senior level, with 2015 being her best year so far. That year, she mined gold in the event at the World University Games in Gwangju, South Korea, and also at the IAAF World Championships in Beijing, China. Williams, who will be celebrating her 25th birthday this September, certainly has many more years of success in the event and has set the pace for her younger countrywomen.

Rushelle Burton, the 2016 IAAF Under-18 silver medallist who recently made her first senior team; fellow debutant Yanique Thompson, the World Under-18 gold medallist in 2013 in Donetsk, Ukraine; Megan Simmonds; and Shimarya Williams all looked set to put the country back on the map in the event.

To add to these are some very young and outstanding hurdles still in high school who all look set to break into the senior ranks very soon. The list is led by Brittany Anderson, who seemed to be a special talent. It has been a remarkable season for the 16-year-old athlete who went to the recent IAAF World Under-18 Championships and bagged gold in the event, posting a wind-aided 12.72 seconds for the fastest time ever at this level. With a legal best of 13.04 seconds, and three other legal sub-13.2 seconds this season, she looks ready to step up to the plate.

Bronze medallist in Nairobi, Daszay Freeman, and Commonwealth Youth Games gold medallist Shanette Allison, who both have gone low 13's this season, would make a deadly trio with Anderson. This is definitely a good sign for the country in the event for the future as the glory days of women's 100m hurdling may be back.