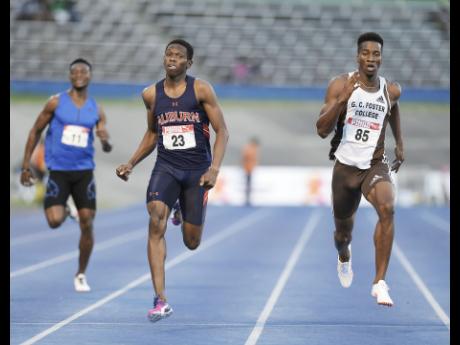 Ever-improving Jamaican quarter-miler Demish Gaye says that he is looking forward to the experience of competing in his first World Championships as he fine-tunes his preparation for this week's London 2017 showpiece event.

Gaye's impressive season was duly rewarded with a spot on the country's team to the championships, and while he is aware that he will not enter the London Olympic Stadium as a favourite for a podium spot, the GC Foster College man is eager to test his level and learn as much as possible as he continues his meteoric rise in the event.

Two years ago, Gaye, who, earlier this year celebrated his 24th birthday, was running times north of 46 seconds. His improvements were hampered last year due to injuries and illness, but his growth in the one-lap event has been nothing short of impressive this year, with the Maurice Wilson-coached athlete dipping below 45 seconds for the first time in his career before posting another two sub-45 seconds times this season.

A second-place finisher behind another improving athlete, Nathon Allen, at the National Championships, Gaye says that he is thrilled to have been rewarded for his hard work and is looking to make the most of the opportunity without putting too much pressure on himself.

"It's a great feeling. I know I worked hard to be here, and so it's really a great feeling," Gaye said from the team's training base at the University of Birmingham yesterday.

"I am a little surprised at the success this season. I was almost there last year, but injury set me back, and so I came out with a focus and drive to go right through this season," he added.

"I feel great. I am up for the challenge and I love the competition. I know I might not win, but I am focused on going out there and doing my best, and whatever the outcome is, I know I have to work on it and come again," Gaye said.

The athlete lauded the spirit of the camp as well as his developing rivalry with national champion Allen.

"It's (camp) been what I expected. The company is great as well, and I am loving it," said Gaye.

"We feed off each other. There is good competition, and that is something that pushes us."

Of his nine races this year, that second-place finish to Allen was Gaye's only loss of the season.