Chase among runs as West Indies flourish against Essex 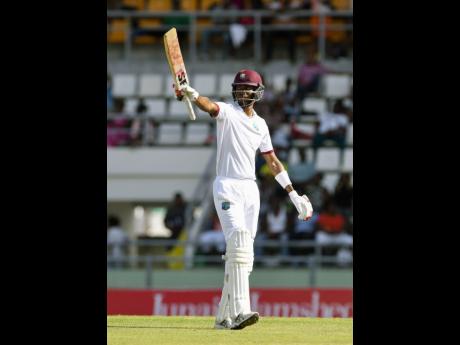 Roston Chase made an enterprising start to his maiden tour of England, leading a trio of half-century makers as West Indies prospered on the first day of their opening tour match against Essex here yesterday.

Sent in at the Essex County Ground, the Caribbean side reached 309 for eight, courtesy of Chase's top-score of 81, opener Kraigg Brathwaite's 61 and Jermaine Blackwood's aggressive 59.

Wicketkeeper Shane Dowrich ended the day unbeaten on 28, while brothers Shai and Kyle Hope both got 22, but failed to carry on.

Up against an understrength side with Essex choosing to rest five key players in view of Sunday's County Championship clash against Yorkshire, the Windies made the most of the opportunity with key batsmen getting among the runs.

They suffered the early loss of Kieran Powell for 15 when the left-hander was bowled by 19-year-old seamer Sam Cook on his Essex first class debut, but Brathwaite then anchored the innings to see the tourists to lunch on 102 for two.

The right-hander put on 36 for the second wicket with Kyle Hope before adding a further 51 for the third wicket with Shai.

Unbeaten on a patient 38 off 91 balls at the interval, Brathwaite lost Shai in the third over following the break - bowled by Walter - but moved to his half-century from 135 balls, while adding 44 for the fourth wicket with Chase.

Brathwaite, dropped on 53 by Nick Brown at second slip off 19-year-old pacer Aaron Beard, eventually perished with the score on 150, bowled by Taylor after facing 155 deliveries in nearly 3 3/4 hours at the crease and hitting eight fours.

West Indies then enjoyed the best stand of the innings as Chase and Blackwood played freely to put on 119 for the fifth wicket to lift their side to 177 for four at tea.

At the break, Chase was unbeaten on a cautious 27 from 78 deliveries, while Blackwood, in contrast, carved out 21 from a mere 13 balls.

Blackwood entertained afterwards, reaching his half-century off 48 balls, while Chase stepped up the pace as well to reach his landmark off 101 deliveries.

Chase was going through the gears when he was bowled by Taylor at 169 for five, and 14 balls later Blackwood, who had been caught off a no-ball on 58, perished lbw to captain Ryan ten Doeschate.

They were two of four wickets to tumble for 40 runs in the last session as the Windies lost their way.