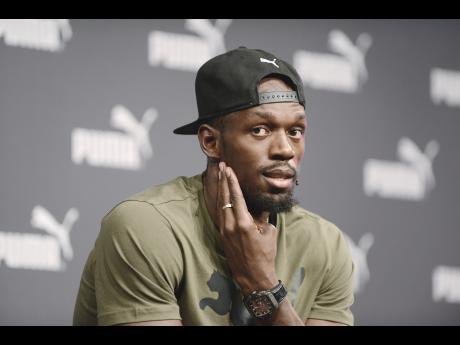 Jamaican sprinting star Usain Bolt has poured cold water on the expected 100-metre challenge from young sprinter Andre De Grasse, adding that he felt that he was disrespected by the Canadian as the two prepare to go head to head at the IAAF World Championships, which gets under way this Friday.

Bolt met with the media for what was his final pre-championships press conference and touched on a couple of topics including his frosty relationship with the medal-winning Canadian, who has repeatedly suggested that he will be getting the better of his fellow Puma brand ambassador this weekend.

"If I see him around, I say 'hi' that's it, I guess," Bolt said while describing his relations with De Grasse. "I don't know how to describe it; I don't have his number."

De Grasse's coach, Stuart McMillan, stoked the fire recently when he accused Bolt of getting his athlete kicked out of the Monaco Diamond League 100m race in order to avoid facing

him before the World Championships. Bolt later said that he was never expected to run in Monaco.

The coach was also said to be in Monaco recording one of Bolt's training sessions without permission.

De Grasse, who would eventually finish second to Bolt in the 200m final at the Rio Olympics last year, tried desperately to beat the Jamaican during an earlier round despite the two clearly being separated from the rest of the field and comfortably in qualifying positions to the next round.

"The last guy I said would be great disrespected me, so I am not going to say who will be great, I am just going to leave it to whoever shows up and is willing to fill my shoes.

We will wait," said Bolt, who would later downplay De Grasse's threat.

"The seven people who will be in that race with me, those are my biggest challengers. I don't know where his (De Grasse) career will go, but in the past, he has won a bronze and a silver, and that shows that he has talent, so we will see what happens in the future," Bolt said.

In his eight 100m races to date this season, De Grasse, who won 200m silver as well as bronze in the 100m and 4x100m, is yet to register a legal sub-10 second clocking. Bolt has won all four previous meetings against De Grasse.