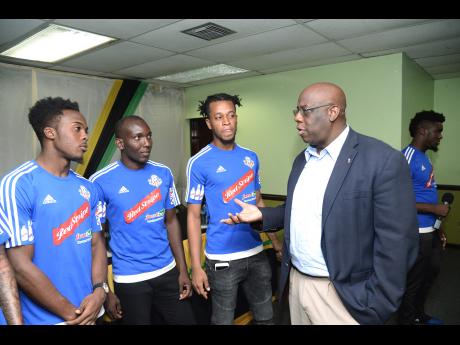 The first and only time Portmore United participated in the CONCACAF Champions League tournament back in 2006, they made it all the way to the quarter-finals.

This evening the St Catherine club, which goes into their CONCACAF League quarter-final first-leg this evening at the National Stadium against Panamanian club, Plaza Amador, wants to duplicate that 2006 performance by venturing deep into the tournament again this year, and club chairman Howard McIntosh has called on local football fans to come out and help give their team the boost they need to push on to the next phase.

"We really need the support of everybody, Arnett, Waterhouse Tivoli, Boys Town, everybody to just come out and support us. You are supporting Portmore, yes, but you are really supporting Jamaica," he added.

The game, which will be streamed live on YouTube, kicks off at the National Stadium at 7 p.m. and McIntosh hopes the tournament can expose Portmore players, like the Gold Cup did recently.

"We are happy that our players, Ricardo Morris, Michael Binns and Ewan Grandison, got the opportunity to showcase their talent (Gold Cup). But here is another opportunity. We live stream on YouTube, and the (international) scouts and agents are here and they will also be in Panama.

"So you have to showcase the talent on the international stage because that is your major source of revenue to ensure the sustainability of the clubs and the football we wish to play."

Plaza Amador are the leaders of Panama's top league with maximum nine points from three games. They have scored six goals and conceded one.