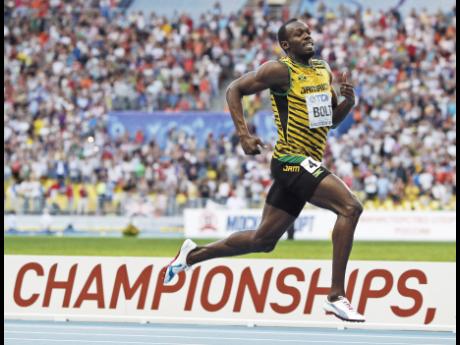 Somehow, it makes sense that Usain Bolt will say goodbye to international track and field in London at the World Championships.

That city has seen Jamaican excellence in athletics in 1948 and 2012. Given the large Jamaican presence in London, it's one of those places where Bolt and the Jamaican team can feel right at home.

In that same city, in 1948, Jamaica competed in the Olympic Games for the first time. Arthur Wint and Herb McKenley put medals on the table with a one-two finish in the 400 metres, and Wint added a silver medal in the 800 metres. Sixty-four years later, Bolt led a 12-medal invasion of London with a sensational sprint triple.

His victories cemented his place in Olympic history. When he completed the 100 and 200 metres double, he became to first to achieve the feat. In the 100m, he produced one of his finest-ever performances with an Olympic-record time of 9.63 seconds.

Shelly-Ann Fraser-Pryce zapped the women's 100m in 10.75 seconds, and Nesta Carter, Michael Frater, Yohan Blake and Bolt closed the show with a world record of 36.84 seconds in the 4x100 metres.

London is sure to remember those golden moments. There could be more this year as the championship runs its course from August 4 to 13. Wear and tear means that Bolt isn't in the shape he was when he set the Olympic record. The man who was fourth across the line then got a time of 9.80 seconds. The closer Bolt gets to that time, the nearer he will be to a fourth World 100m title.

In 1948, Jamaica was strongest in the event some still call the 'quarter mile', despite the fact that the Olympics and World Championships have never use imperial measure. Now, as it has been for generations, Jamaica is a sprint powerhouse.

In London, in the days to come, Bolt and Elaine Thompson could win their respective 100m events, with 2011 World Champion Yohan Blake challenging Bolt if he is fit. Olympic 110m victor Omar McLeod and the men's 4x100 team, if Blake is 100 per cent, are both set for gold. Reigning World 100m hurdles champion Danielle Williams has a chance to win her event, too.

This writer's guess at a medal count stops one short of the dozen won in London by the 2012 Jamaica team. One colleague, whose Boys' Championships have been spot on recently, thinks there are 16 medals that will fly home to the Land of Wood and Water on August 14.

The key event in such forecasts is the 110m hurdles. McLeod is a clear favourite. Hansle Parchment, the 2015 runner-up, is a proven big-meet peaker, and newcomer Ronald Levy seems to possess the speed to join McLeod and Parchment in the sub-13 second speed zone.

A sweep of the medals would be sensational for a country which has only one medal, Parchment's silver, to show for its presence in the World Championships since it started in 1983.

Parchment won Jamaica's first Olympic 110m hurdles medal in London. Fedrick Dacres could do something similar in the discus. If every prediction in my friend's sweet 16 is right, the medal haul would exceed the Olympic-World record total of 13 won at the 2009 World Championships.

Bolt is so big, though, that such an achievement would probably take a back seat to the end of the long goodbye. Now that I think of it, the last time we waited a year for a Bolt headline was in 2009. He had eased up en route to a world record of 9.69 seconds in the 2008 Olympic 100 final. A year later, he showed what he could do flat out with an even faster clocking of 9.58 seconds. Now, with his retirement plans known for a year, we're just watching the tall man go.