London 2017 | Dwyer determined to prove himself 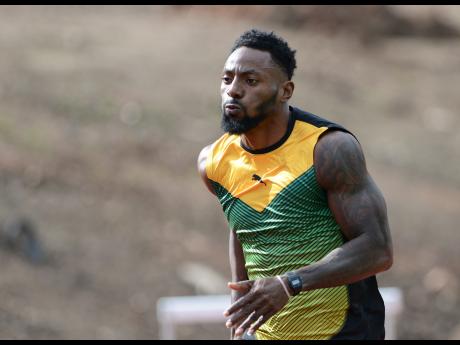 Ricardo Makyn
Rasheed Dwyer in training at the Team Jamaica camp in Birmingham on Monday.

Rasheed Dwyer is gearing up for his first individual appearance at a major world athletics event, and he is determined to prove that he has what it takes to be taken seriously as a top-drawer sprinter.

Dwyer, the Commonwealth Games champion over 200 metres, also travelled to Beijing, China, as a member of Jamaica's 4x100m team at the last World Championships, but knows that this will serve as his biggest test.

Though admitting being somewhat nervous about the challenge that awaits, Dwyer believes he is in good shape to achieve his objectives in London.

"I just have to put my race together, and I think I am in a pretty good shape right now, so I am looking to go out there and execute a proper race," Dwyer said.

"Every championships I have been to, I have proven myself, and that's what I am going to do here - [to] just focus on every round and take it a step at a time, and make sure I qualify for the next round," said Dwyer. "I am not going to doubt myself. I am just going to go out there with a steady mind and focus myself."

Despite the absence of Usain Bolt in the 200m this season, the half-lap event promises to provide stiff competition with 400m specialists such as Isaac Makwala and Wayde van Niekerk showing their speed with 19.77 seconds and 19.84 runs, respectively, in the shorter sprint.

Dwyer is expecting a tough contest in the English capital, but is backing himself to be in the mix, despite still searching for his first sub-20 seconds time this season.

"It can be nerve-racking, but as a professional, you have to get your head in the game and get the job done. I think the 200m is very competitive. There are a few guys who are doubling and coming down from the 400m with endurance, and people from the 100m coming up to the 200m with speed, so as a 200m specialist, I know I have to work on getting it right with both my speed and endurance. But I am looking forward to it, and I don't doubt myself at all," said Dwyer.