London 2017 | Weir getting into form at the right time 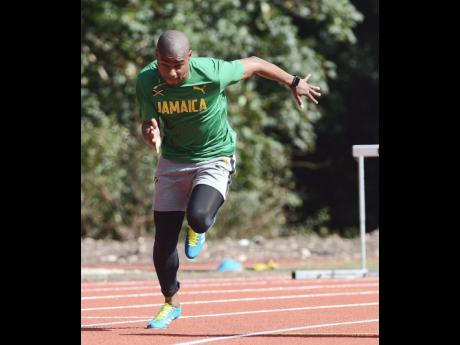 Ricardo Makyn
Sprinter Warren Weir sharpening up his start at the Team Jamaica camp in Birmingham.

It has been a rough two seasons or so for Jamaican sprinter Warren Weir, who has struggled to extend a two-year spell that saw him mining Olympic bronze and World Championships silver medals in 2012 and 2013, respectively.

Those were the highlights of an impressive period that saw Weir clock 19.79 seconds at the National Senior Championships in 2013 for what remains his personal best. That season, Weir ran under 20 seconds on six occasions.

Since then, the former Calabar High sprint hurdler has only posted one sub-20 second time - a 19.82 seconds effort at the 2014 New York Grand Prix. So counting his nine starts this season, that's one sub-20 second time in 33 races for Weir, who also had to deal with missing the final at the 2015 World Championships and failing to qualify for last year's Olympic Games.

But Weir knows very well that sometimes, one has to take a few steps back to move forward; and moving forward is what the 27 year-old is determined to do in London, the city where it all started for him, after his podium sweep - sealing bronze-medal finish behind Usain Bolt and Yohan Blake at the 2012 Olympic Games.

"Firstly, I must give thanks to the Most High. It has been a rough few past seasons, but we are slowly but surely getting into the right form at the right time," Weir noted. "After every season, we kind of look back at things we didn't do that we could have and things that we could have done better, and we made the necessary changes, altered a few things, and went back to doing some things that worked in the past, and it's been going well so far, and now we are being patient. We are not rushing anything."

Weir admitted that personal issues played a role in his setback, but underlined that he is pushing to make things right on his return to the English capital.

"It's a mixture of everything - a little business and a little personal - but at the end of the day, we are not getting younger. We are getting older, and the youngsters are running very fast times, and we want to carry on the legacy a little longer," said Weir.

"London 2012 was my first major games and was everything for me. I went back the year after and ran the same time I ran at the Olympics in a Diamond League race, so it shows that this place is pretty special for me, and most definitely, I am looking for a good championship. I am in good spirits, good health, and I am where I wasn't in previous years, and I am thankful for that," Weir shared.

Weir said his focus is to put together a balanced race with even speed distribution, and he believes that the 200m event is more balanced than in previous years.

"Everybody is at the same place with a couple of exceptions above us, so it's an open field, and even people that you don't know of can show up on that day - like I did in 2012."