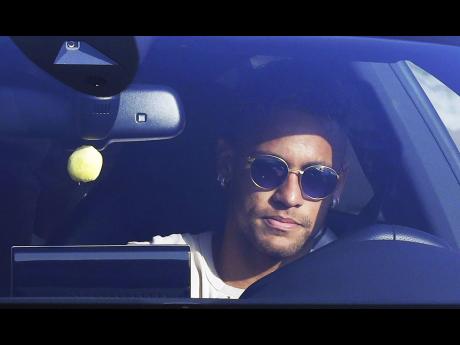 Neymar is ready to leave Barcelona, and Paris Saint-Germain (PSG) is ready to put up a record US$262 million to make it happen.

The 25-year-old Brazil striker, widely considered to be among the best soccer players in the world alongside Lionel Messi and Cristiano Ronaldo, broke weeks of silence Wednesday when he told his Barcelona teammates he wants to move on after four trophy-laden seasons.

The cost of the player's buyout clause is €222 million (US$262 million), an astonishing price that Neymar's representative said PSG is willing to pay.

"After Neymar gave me the green light on August 1, I went to Paris, and today, I brought back PSG's offer to pay the (buyout) clause, which will be done in the next hours," Wagner Ribeiro said yesterday at the airport in Barcelona.

Ribeiro, speaking at an airport entrance as Neymar headed toward a flight, said his client would be with the French team by this weekend. He refused to say where Neymar was flying.

The payment of the buyout clause would dwarf the previous world record transfer of €105 million (then US$116 million) that Manchester United paid for France midfielder Paul Pogba last year.

After Neymar and his father met with Barcelona officials yesterday, club spokesman Josep Vives said the player was reminded of "the release clause in his current contract, which as of July 1 is €222 million, which must be paid in full."

Messi, who has led a dynamic striking trio with Neymar and Luis Suarez, wished the Brazilian well.

"It was an enormous pleasure to have shared all these years with you, my friend, Neymar. I wish you the best of luck in the next stage of your life," Messi wrote in Spanish on Instagram along with a slide show of pictures of the two playing and celebrating together. Driving a blue Audi with two passengers, Neymar breezed in and out of the Barcelona's training ground outside the city earlier yesterday.

He had arrived in Spain on Tuesday night after holding publicity events for both his personal brand and Barcelona in China.

Last year, Neymar signed a new contract with Barcelona that tied him to the Catalan club through 2021. Vives noted that Neymar "is still under contract with FC Barcelona, but with temporary permission to not take part in the training session."

Barcelona said Neymar did not specify where he wanted to play next, but the only club speculated to be after him and one of few which could handle the cost of the transfer is the Qatari-owned PSG.