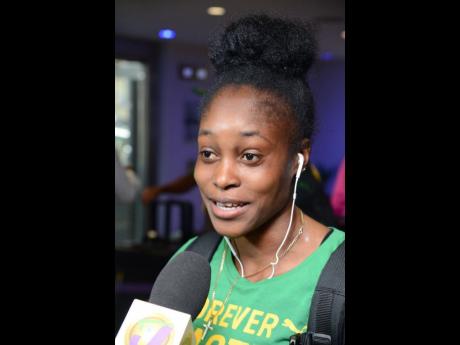 Jamaican sprinting star Elaine Thompson says she is in good shape heading into the World Championships in London adding that she has fully recovered from an Achilles issue that was bothering her a few weeks ago.

Last month at the London Diamond League meet, Thompson had to compete in training spikes to protect her Achilles after a new pair of spikes, which were built for her by her kit sponsor Nike, caused discomfort in the area.

The double Olympic sprint champion told The Gleaner on Thursday, that she is ready to compete and is looking forward to the test in London. “I’m in good shape,” Thompson said from the team’s hotel. “I have to give God thanks. Since I got back from Eugene, I got some new spikes from Nike and they weren’t comfortable at all, they were giving my Achilles some slight discomfort so I got some training flats from them for London (Diamond League) just to try but I am back in shape now, the shape that I am supposed to be in.”

“Hopefully by Saturday you will see me in the spikes I’m supposed to be in so it’s all good now,” Thompson added.

Thompson, who will only be competing in the 100m at these championships, has been in terrific form this season, winning eight of her nine races in the event with a season best of 10.71 seconds.

She also again underlined her reasons for skipping the 200m at London 2017, noting the difficulties experienced in Rio last year.

“Last year the double was really difficult and I am excited and looking forward to competing in the 100m and 4x100m here,” Thompson said.