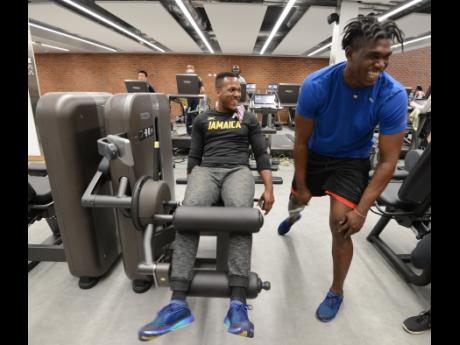 The godfather of the local throws movement Michael Vassell says there are four or five men who could win the discus at the IAAF World Championships. Among them is Jamaica's Fedrick Dacres who, according to Vassell, will do well if he stays focused. Vassell says consistency has made big Swede Daniel Stahl the out and out favourite for the gold medal.

Defeated by Dacres at the Stockholm Diamond League meet, Stahl has the longest throw of the season at 71.29 metres. "The most amazing thing about Stahl is his consistency," said Vassell on Emancipation Day.

The Swede has thrown past 68 metres in six meets this year.

"I don't think it will be just Stahl and Dacres", he pronounced. "I think we have Stahl, we have Dacres, we have the Harting brothers, Gudzius so any of these five, on the day", he predicted, "it's who will hold their nerve best."

One of that quintet, 2016 Olympic champion Christoff Harting, is missing from the list of entries but the field does include his big brother Robert Harting of Germany and Poland's Piotr Malachowski, the last 2 World Champions.

Dacres, Stahl and Gudzius, who preceded the Jamaican as World Junior champion by winning in 2010, have swapped wins and losses during the season.

"All I want him to do is stay focused, just relaxed and I'd tell him just pretend you're at Excelsior because he loves throwing there," said the Excelsior High School throws expert. Dacres has often excelled in the Antrim circle and set a national record of 68.88 metres there in February.

For the first time ever, Jamaica will have two entrants in the men's discus. Traves Smikle, a 2012 Olympian with a best throw of 65.00 metres, will accompany his former Calabar High School and current UWI teammate, into battle when the discus qualifying round starts today.

"It's good to see him back there," Vassell said, "and I know that as one of the pioneers, he will get back."

The left-handed Smikle goes in qualifying Group A which is set to start at 7.20 p.m. inside the London Stadium with Dacres in the ring with Group B at 8.45 p.m. To advance to the final, Dacres and Smikle must achieve a distance of 64.50 metres or be among the top 12 competitors.