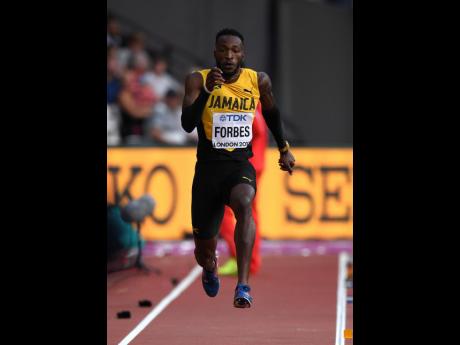 After booking a spot in his second IAAF World Championships final and his second at a major international championships after last year's 12th place Olympic finish in Rio de Janeiro, long jumper Damar Forbes is looking to bring the energy and take another step.

Forbes jumped 7.93m on his last attempt to qualify to today's medal round and even though he is not satisfied with yesterday's effort, he is confident he stands a good chance to get on the medal podium and is looking to change his approach at today's 8:05 p.m. (2:05 p.m. Jamaica time) finale.

"I feel like I could have gone better today, but the objective was to qualify, survive and advance, and I did that today. I had some jumps where I had some technical issues and dropped my arms back, so I feel I could have gone over eight metres a couple of times, but that's what happens in competition like this, you have to bounce back and respond," Forbes told The Gleaner.

Forbes, who registered marks of 7.82m and 7.86m in the previous two rounds, added that spending time preparing in Birmingham certainly helped him deal with the testing conditions inside the London Stadium.

"I think it helped, we practised in Birmingham and it was rainy and cold and I feel that if your mindset is to go through it no matter what then nothing can hurt you.

The wind was kind of swirling, but I concentrated on executing and getting into the final and putting everything into the last jump and coming off the board as best as I could. I know I have to work on the little technical issues but it will be good," he said.

"It was certainly cold, and because there are so many persons jumping, it's kind of hard to stay warm.

A lot of persons kept declining as the event wore on, but because I knew how it would feel, I was able to deal with it better," he added.

Forbes underlined that he is focused on applying more energy to his series tomorrow as he looks to emulate James Beckford as Jamaican long jump medal winners at this level.

"Energy, that's what I need to improve on. Tomorrow (today), I will have to bring more energy and I will be all right," said Forbes.