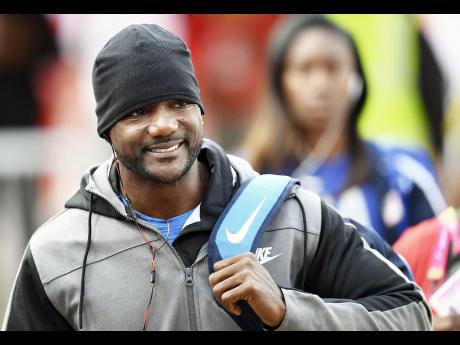 American sprinter Justin Gatlin has US$100 riding on Usain Bolt returning to track and field.

The American, who is expected to challenge Bolt for the 100m gold medal at the World Championships in London, joked that he is expecting the Jamaican to return to competition after a worldwide party tour and even found time to make the wager with the Jamaican before their respective heats yesterday.

Gatlin comfortably won his heat in 10.05 seconds, the same time that Bolt recorded on his way to a first-round win with the two set for another collision in today's final which gets started at 9:45 p.m. (3:45 p.m. Jamaica time).

Asked if he felt that he was being overlooked as a gold medal favourite despite coming into the championships with the same season best of 9.95 as his Jamaican rival, Gatlin said he was quite at ease with his underdog status.

"I'm good, it's his time right now, it's his last race. I joked around the back that he was just going to take a year off, party around the world and come back to track and field and he laughed at me; we have a $100 bet on that, but we'll see what happens," laughed Gatlin, who noted that he is looking forward to facing Bolt in the final.

In their nine previous 100m races, Gatlin has only beaten Bolt on one occasion back in 2013 at the Rome Diamond League, meaning the Jamaican has won their last five meetings, which include victories in finals at the 2013 and 2015 World Championships in Moscow and Beijing as well as last year's Olympic Games in Rio de Janeiro.