#ReturnToLondon: Bolt bows out of London with bronze 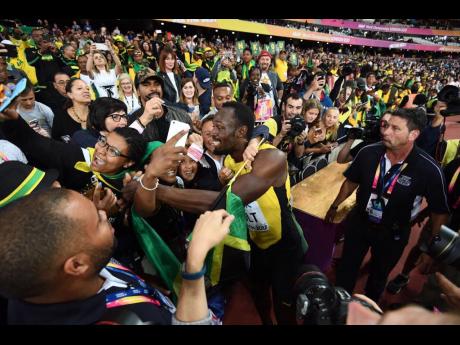 Bolt celebrates with supporters at the London Stadium after competing in the Men's 100m final. - Ricardo Makyn Photo

Jamaica's sprint superstar Usain Bolt suffered a shock defeat in the final individual race of his legendary career, finishing in 9.95 seconds taking third in the men's 100m final at the IAAF World Athletics Championships in London.

The race was won by his American rival, Justin Gatlin, in a time of 9:92 seconds, with another American, Christian Coleman finishing second in 9.94 seconds.

Gatlin appeared to salute Bolt before the two shared a long embrace and exchanged words.

The world record holder over 100m and 200m then greeted fans all around the London Olympic Stadium, ending with his trademark 'To the Worl'" pose.

Speaking after the race, Bolt said he gave it his best.

He insisted also that this was his last race at a major international championshipships.

"My body is telling me this is it," he said during an interview with TVJ news.