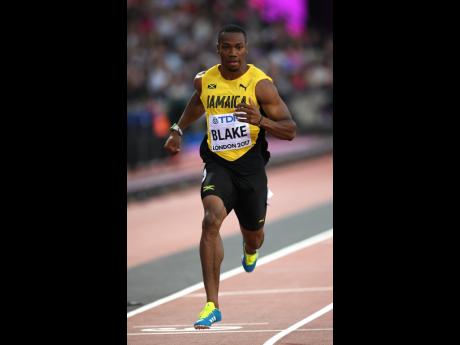 He had to work a little harder than he expected to book his lane in today's men's 100m semi-final, but the wry smile at the end and the confident bounce through as he made his way from one interview to the next tell the story of a sprinter who has rediscovered his swagger.

"I want to show the world that Yohan is back," said Blake, who recovered from a truly insipid start to finish second in 10.13 seconds behind Japan's Hakim Sani Brown (10.05), with China's Zhenye Xie (10.13) matching Blake's time for third place.

It has been a while since Blake stepped on the track at a World Championships. In fact, the last time he did so, he left it as the youngest-ever World champion in the 100m back in 2011 in Daegu, South Korea.

'GREAT TO BE BACK'

It's a reality that is not lost on the now low-trimmed Blake, who said he was feeling good and looking forward to today's semi-final despite the testy race he put together yesterday.

"It feels great to be back, and I want to go out there and replicate what I did back in 2011," Blake noted before assessing his race.

"I got out of the blocks pretty slowly, but I just did enough to get through, but I am feeling good still, and I am feeling strong. I just want to take it round by round and let people see that I am here, but trust me, I have something coming!" Blake exclaimed.

Blake entered the World Championships with the second-fastest time recorded this season in the 100m, with a 9.90-second clocking, which leaves him behind American Christian Coleman's 9.82.