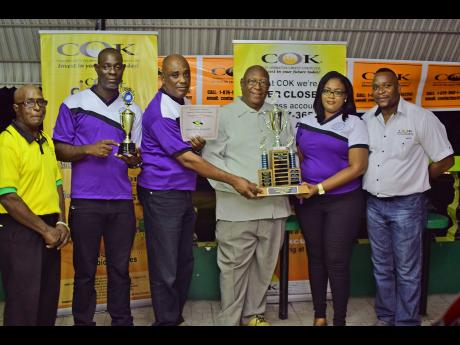 Colour Colour pocketed US$1,000 for first place, while runners-up TG Strikers received US$300 plus trophies and other prizes.

Meanwhile, Alwyn 'Brownspeed' Brown, the organiser of the competition, said he was pleased with the level of support and the skill level of the players and promised much bigger things for next year's competition.

Links United are still in a celebratory mood as they were the toast of last Sunday's awards presentation for the Jamaica Domino Federation-City of Kingston Cooperative Portmore/St Catherine awards ceremony held at the Ken's Wildflower Sports Bar.

The awards were handed out by the host, Lester 'Father Ken' Crooks, Gerald Stephens, the president of the Jamaica Domino Federation, and Morris Livingston, Portmore Branch manager for the sponsors, COK Cooperative Credit Union.

Sunshine City powerhouses Portmore United are on the hunt for Junior football silverware.

The undefeated team take on Zone A runners-up Independence City in the second match of a double header at the Pines Imaging Centres-sponsored Portmore Under-17 Football League at the Cedar Grove playing field at 3 p.m.

In the opening game at 1 p.m., Zone A winners Edgewater tackle Zone B runners-up Racing United. Portmore topped Zone B with maximum 27 points, while Edgewater topped Zone A with 24 points.

G.C. Foster's Daniel Glaves was a repeat champion at the second Fuss A August 5K Road Race run/walk hosted at the Mile Gully community on August 1. Sonia Gayle was also a repeat winner in the women's 5K Run, along with road race queen Natasha McKenzie in the 5K Walk, and Richard Bryan in the over-40 walk category for men.

Jon Saleem Oliphant, who won the 5K walk at its inaugural event, had to settle for second place behind Duwell Allen.

However, the toast of the meet was 16-year-old Mile Gully student Oshane Cespedees, who placed first in the youth category of the 5K run. He received the largest cheers at the presentation which followed.

Another key committee member, Barry Watson, said that an annual football competition would be incorporated as part of the day's main 5K to bring out the men. The event also attracted major sponsorship from Kirk Distributors and the Kendel brand.

Pro Hardware waltzed into the quarter finals of the Top Notch Blocks Summer Football league after knocking over Old England 4-1 in last week's penultimate round of the preliminary phase.

It was Pro Hardware's fifth straight win and came against a team which were the beaten finalists earlier this year in the Manchester Division Two competition.

Another qualifier from last week were Generation United who tagged Cedar Grove 2-0 courtesy of goals from Ivana Smith and manager-player, Bruce Chambers.

All matches are being played at the Sunset playing field in Knock Patrick, Mandeville.

Four teams have secured quarter-final knockout spots in the Georges Valley Corner league, which is played exclusively at the deCarteret College ground.

The quartet is lead by the two Zone One qualifiers in Red Square and Villa United, as well as Central United One from Zone Two and Quest Security from Zone Three.

Zone One was sewn up after some amazing results this week. Hope Village, who were firm favourites to advance after counting six points after their first two games, were sent packing on goal difference after they were beaten 3-0 by Red Square on Monday. Villa also profited from a 2-0 gift from Mandeville United.

Central United One were impressive qualifiers scoring most goals after mining successive 6-2 efforts against Berwick Town and Sinclair Avenue. Quest Security secured their quarter-final berth after getting their second win with a 3-1 victory over Frederick Peace. The final qualifier from this zone will be determined after the final match next Tuesday between Samacan Youths and Samacan Masters.

The competition continues today with two crucial matches as part of the day's double header at deCarteret College. The hosts, featuring their 2017 daCosta Cup squad, take on Central Untied Two at 1:30 p.m. before New Hall clash with Berwick Town at 4 p.m.

Connections, Galaxy kick off Porus U-15

The 2017 edition of the Western Union-sponsored Porus Under-15 league kicked off successfully last Sunday at the Porus Community Centre.

Newcomers Los Perfectos of Mandeville won the dress parade from a group of 10 competing teams. In the day's double header, Galaxy opened the competition with an 8-0 thumping of Genius before the defending champions Connection welcomed Los Perfectos with a 4-0 win.

In the matches played on Monday, Sporting Academy blanked Villa United 3-0, while in the second game, Tuff Gong achieved the same result against Rising Stars. Later on Wednesday, Sporting became the first team this season to achieve two victories in a row when they topped Rising Stars 2-1.

The competition takes a break tomorrow for the Independence holidays, but action resumes on Tuesday, August 8, with a double header. At 3:30 p.m. Litchfield bow into action against Rising Stars and at 5 p.m. Settlement take the field for the first time against early leaders Sporting Academy.

The St Catherine FA waltzed their way to both titles of the South Central Confederation of the Jamaica Football Federation 2017 Juici Patties Youth Competitions in Under-13 and Under-5 groups.

On the final day of competition, St Catherine overcame St Elizabeth 4-2 to dethrone Manchester and become the new Under-13 champions.

Clarendon, despite not winning a single game in the Under-15s, managed to gain the runner-up spot in the Under-3s. They amazingly held on, on goal difference over Manchester, even after Manchester defeated them 2-0 in the final game.

The competition this year saluted 31 years of sponsorship by Juici Patties.