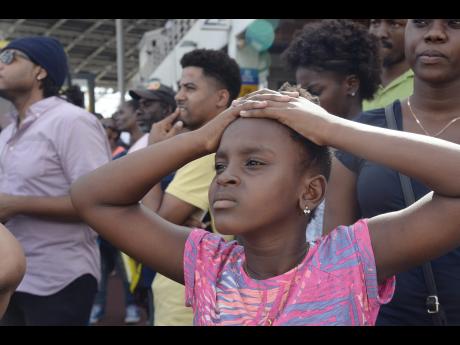 "All good things must come to an end" were the words of Sonia Thomas as she cried openly after watching Jamaica's sprint star Usain Bolt finish third in the final of the men's 100m at the World Championships in the London.

The event was won by American Justin Gatlin in 9.92 seconds while his teammate, Christian Coleman, took the silver in 9.94. Bolt was third in 9.95.

Thomas was among the hundreds of fans who turned out at the Half-Way Tree Transport Centre yesterday to watch Bolt compete in the last international individual event of his career.

She said she was very disappointed and saddened that Bolt had lost his final race to the Americans.

"I really can't believe! I am shocked!" said Thomas. "But he is still the greatest sprinter of all time and I will always love him," she said.

Rosina Moder said although she is disappointed that Bolt lost the race, he remains a champion.

"I am still excited because, for me, Bolt can never lose," said Moder. "Gatlin finally gets his win, but the world still loves Bolt.

Jermaine Gonzales, a former training partner of Bolt at the Racers Track Club, said he was shocked by Bolt's defeat.

"I am very disappointed because I wanted him to finish his career on a high," said Gonzales.

Minister of Sports Olivia Grange, who also turned up at the Half-Way Tree Transport Centre to watch the Bolt's final individual race, said, despite his defeat, Bolt is still a champion.

"He just got a bad start on a bad day," said Grange."Jamaica loves him and appreciate him and no one has achieved what he has achieved in track and field and, so we still celebrate him," she added.