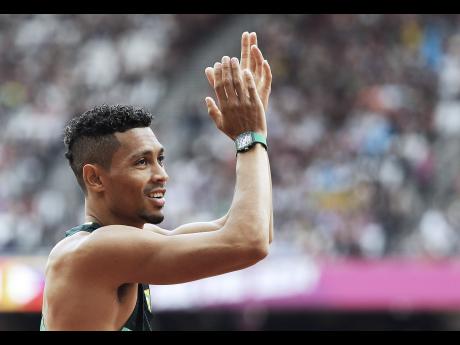 Raymond Graham: Following some terrific running in the first round of the men's 400 metres, expectation is that it will be a cracker in the final.

Andre Lowe: This was always going to be one of the most anticipated events, and yesterday's heats have only confirmed that expectation. Wayde Van Niekerk and all the other big names have looked impressive and we could see another special time here.

Raymond Graham: I think the South African was very smart. He just did enough to win as he is doubling up. Makwalla, I think, ran too fast, while the likes of Fred Kerley and Steven Gardiner also ran smart. The winner will come from one of these although Van Niekerk is still the favourite to go all the way.

Andre Lowe: Good run, too, by Jamaicans Nathon Allen and Demish Gaye, but it's hard to look past that group that you mentioned. I still think that Van Niekerk is the man to beat here, and there has been talk by those who follow him closer than I do that a new world record is on the cards. He'll certainly have the encouragement with Makwala and Gardiner, in particular, pushing him all the way.

Raymond Graham: I do not think a world record is on the cards as he wants to win the double and will be saving for the 200 metres.

Andre Lowe: Fair point, but I don't think he'll be thinking about that when the others are breathing down his neck. He'll have no choice but to extend himself, and doing so, on what is a fast track, will certainly lead to him testing his own 43.03 record.

Raymond Graham: Yes, he definitely will have to run from the go as Makwala and Kersley will force him to do so and we could see another super time in the end, but world record, I am not sure.

Andre Lowe: I'm going with a Van Niekerk win ahead of Kerley with Gardiner edging Makwala for third.

Raymond Graham: For me, it is the Olympic champion. Very close for the other medals with Kerley just edging Makwala for silver.