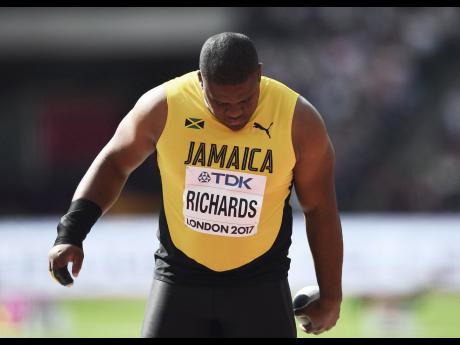 Disappointed at missing out on a return to the men's shot put final at the 2017 IAAF World Championships in London, national record holder O'Dayne Richards isn't only questioning a foul called on his first effort inside the London Stadium, but also his own mental fortitude.

Richards, the 2015 World Championships bronze medal winner, registered 19.84m and 19.95m on his next two attempts, finishing with his worst mark since January and falling outside of the top 12 positions.

The 28 year-old Commonwealth champion said he disagreed with the call made by the official on his first throw, but suggested a need for greater mental toughness on his part on his follow-up efforts.

"I am very disappointed," Richards said. "I thought it was a bad call. I tried to adjust the technique to accommodate not fouling again, didn't do so good on the second throw, and (on) the final throw I tried again, but it was not good enough."

"I think it boils down to mental toughness. To have a bad call or to think it's a bad call on your first throw and then to forget about that, recover, while the pressure is building up because you want to make the final; I was not mentally tough enough to battle that and overcome the situation," Richards lamented.

Richards, who improved his own national record to 21.96m at his last meet before the World Championships, the Rabat Diamond League competition, was largely expected to advance to the final and challenge for a medal after arriving at the championships as the sixth ranked thrower here.

New Zealand's Tom Walsh leads all qualifiers into tomorrow's final with a 22.14m mark. He is the only thrower who went over 22m during yesterday's competition.