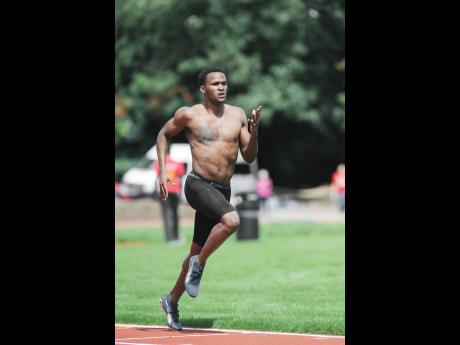 Simply competing at the World Championships in London is not enough for one-lap hurdler Jaheel Hyde.

Emboldened by last year's experience at the Olympic Games in Rio de Janeiro, where he reached the semi-finals, Hyde is now determined to push his development along and take it one step further with a spot in the final.

That's the target established by the young Hyde, who comes into the championships on the back of a season that saw him twice lower his personal best.

"I am not a junior anymore. I can't just be satisfied with simply making the team. I want to take it one step further and make it to the final and just give myself a good shot," Hyde told The Sunday Gleaner ahead of his first-round run today at 11:05 a.m. (5:05 a.m. Jamaica time).

Hyde is drawn in Heat 2 and will run out of Lane 9 inside the London Stadium.

"I don't want to just come here and say that I participated. I want to compete and vie for one of the top positions," Hyde underlined.

"Last year, I made my goals. I defended my World Junior title and I qualified for the Olympics. Those were my two goals last year. I took the qualifying for the Olympics as a step forward and used it as a learning experience, and that is what I will be hoping will help me to get a top position here," he added.

Hyde lowered his personal best to 48.52 seconds earlier this year, but says his focus is on delivering a big performance when it matters - on the day.

"It all comes down to the final eight. I just want to get myself in that final eight. It doesn't matter what time you're running or what your name is, you have to come and run it on the day, and I am an on-the-day person. Anything can happen on the day."