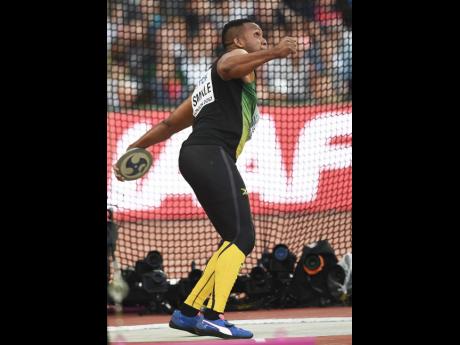 LONDON, England:
“I have learnt that I am a fighter and if I am a little more confident I will do great things.”
Traves Smikle has had his share of struggles and challenges.

Besides injury issues and a mental battle with himself where a low confidence was the culprit, Smikle also lost two years in the sport after he was banned after testing positive for the prohibited substance Hydrochlorothiazide at the National Senior Championships in 2013.

Smikle, who finished eighth in the men’s discus final at the 2017 IAAF World Championships inside the London Stadium – an improvement on his performance at his only other senior global international meet, the 2012 Olympic Games  – said he was grateful for the opportunity to get his career back on track.

“I have no complaints,” he told The Gleaner following his 64.04m mark.

“Anybody who knows my story knows it takes a lot to come back from my situation and to make it to the final I am very happy and I have to give all praise to God. He has kept me through the five years that I have been struggling and kept me so that I was able to come here and make the finals despite a testing season,” he added.

Since his Olympic qualifying year in 2012, Dacres had never broken the 64m mark before this season’s 65.00m effort in Kingston in mid-June, but as he explains, the road to this point was not an easy one.

“I had my own problems - physical, mental; but to come here and make the final, I am really happy about that.

“It was pressuring to come here in a field of many throwers who could have made the final; top class throwers, and to beat many of them has made me really happy and I hope to continue improving,” Smikle added.