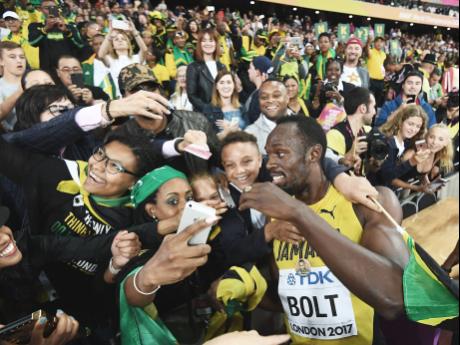 Ricardo Makyn
The crowd at the London Stadium just could not get enough of Usain Bolt despite his defeat.

It wasn't quite the end that most persons inside the London Stadium wished for, but sprinting icon Usain Bolt said it was hard to be sad with what was his first third-place finish at a major championships, as he crossed the finish line for the last time in an individual race.

Only the 4x100 metres remains on the Jamaican's agenda. Two relay legs and then the most storied sprinting career will come to an end.

"It's hard to be sad with the energy that the crowd was giving me. It was a great feeling and I really appreciate the love that they always give me," said Bolt. "It's my first bronze medal. I'm a little bit disappointed. I tried my best, I did my best and it is what it is. I tried my best and I am happy with what I got."

He did try to recover from yet another horrid start (even by his standards) at these championships, and though he came close, in the end, his season's best matching 9.95 seconds was not enough to get him past Christian Coleman, 9.94, and an emotional Justin Gatlin, 9.92, who was winning his first individual gold medal since the World Championships in Helsinki in 2005.

"There are so many things over the years that I have done that I have made myself proud and I am happy with my career," said Bolt. "I think it went well. I wish I could have finished on a high, but it was one of those things.

"Jamaica, sorry about that, and thanks for the support and love. I appreciate everything over the years. I have done my best over the years," he added.

"I think I put a little pressure on myself. I knew if I didn't get in the race early, I would be in trouble and I think I might have played that on my mind a little bit too much. I tried to get back in the race as quickly as possible, but it wasn't enough," Bolt added before throwing his support behind Gatlin, who was again booed by the capacity London Stadium crowd.

"I think, personally, that was a bit harsh. He has done his time and if he is in the sport, he should be looked at as a competitor. For me, that was tough for him. He showed that he is a true competitor by coming out here and winning," said Bolt.

"I am very disappointed in myself. I felt great in the semi-final and I know I should have medalled here. I don't know where I went wrong, but I think my start was not what it should be," said Blake.

As hard as it might be to believe, Bolt's loss was the highlight of a rough second day of competition for the Jamaicans.