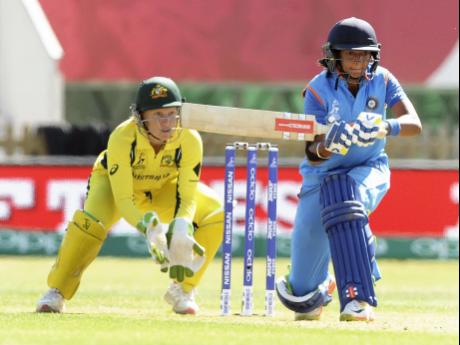 AP
India's Harmanpreet Kaur on the go during the ICC Women's World Cup 2017 semi-final cricket match between Australia and India on July 20.

I remember the days of the late 1960s and early 1970s when women like Monica Taylor and Sally Kennedy, Rhona McLean, Vivalyn Latty (later Latty-Scott), Joyce Miller, Jean Cadogan, Kay Osbourne, Peggy Fairweather, and a host of girls, young and old, used to gather on a Sunday afternoon to play cricket, or rather, a game of bat and ball.

Those days, it was a novel idea to see women attempting to play cricket, and men used to turn up, drink beer, and watch the women try, with all their might, to bowl the ball the length of the pitch, or to hit the ball off the square.

Those days, especially at Kensington, Lucas, Waterwell, and Melbourne, were fun days, plenty of fun.

Fast-forward to the last month or a little longer, to Bristol, Derby, Leicester, and Taunton, and it was no fun at all.

It was cricket, it was the World Cup, women's version, and for a month, it was a war, a thrilling war, climaxing at Lord's two Sundays ago in the final before a packed house of some 28,000 cheering fans.

Thank God for cable. Because of cable, I was able to see the matches live, or most of them, and what I saw was "cricket, lovely cricket".

Back in the early days, I never did believe that I would ever live to see women bat so well, bowl so well, chase balls so vigorously, and take such brilliant catches.

I did see people like Latty-Scott and Miller, and I did see them bowl. I did see people like Cadogan and Marlene Needham bat, and I have seen Stafanie Taylor and Deandra Dottin batting, and Hayley Matthews must be a promising up-and-coming player, but what I saw in the recent World Cup was revealing.

The women can bat, and I don't mean that to say that as women, they can bat. Except for the physical side of things, the pace of the bowling, the deadly aggression of the bowlers, and the physical damage that men can do if faced by women batswomen, women are almost on par with men, all but the best of men, and with a little bit more experience, they may narrow the gap.

The eight best teams in the world played against each other for a month, and the cricket was good, technically, and it was entertaining, and many of the contests were riveting.

England and Australia were the big teams, New Zealand were considered next in line, then, probably, the West Indies, and then South Africa and India with Sri Lanka and Pakistan behind.

From the start, there were surprises as South Africa defeated India, England defeated Australia, Australia defeated India, and India defeated England early in the proceeding's during which the West Indies, winners of the World T20, were beaten out of sight and embarrassed along the way.

Years ago, when I saw the legendary Rachel Heyhoe-Flint of England in action, she was good, and so was Enid Blakewell of England and later, Charlotte Edwards, also of England.

They were, to me, as good as any woman could have been, or were expected to be.

On top of that, the innings was played in a semi-final match of the World Cup, the team's score was only 281, and no other batsman, or batswoman, passed a total of 35 runs and only one other got to 20.

The bowlers, too, were masterly, with Anya Shrubsole of England, Jhulan Goswami, Rajeshari Gayakwad, and Elka Bisht of India, Holly Huddleston on New Zealand, and Dane van Niekesh of South Africa, who took four wickets for no runs against the unfortunate West Indies, being the pick of the lot.

Women's cricket has come a long way since the days of the late 1960s and early 1970s, so far, in fact, that there is now talk of a tournament comparable to the IPL of India.

Can a women's tournament of that magnitude really see the light of the day, and can it pay for itself?

If the players continue to improve at the present rate, if they continue to dedicate themselves, practise and train regularly as they obviously do now in countries like England and Australia, maybe in India and South Africa, and if they continue to produce and to parade not only in the manner of the likes of Raj, Kaur, Sarah Taylor, Lanning, Stafanie Taylor, Dottin, but also of others like Heather Knight and Natallie Sciver of England, Ellyse Perry and Ellyse Villani of Australia, it certainly will.

It will also take a whole lot of support and money.

The packed house at Lord's was not there for the novelty. It was there to see cricket, good cricket, and it will go again and again to see good and exciting cricket.